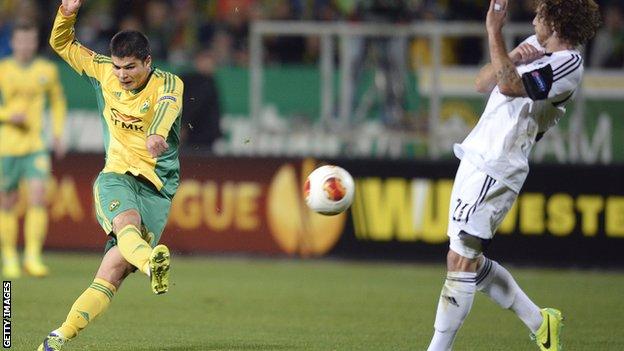 Swansea City were denied a Europa League win against Kuban Krasnodar for the second time by another late goal.

Djibril Cisse's penalty earned the Russians a point at the Liberty Stadium, and Ibrahima Balde rescued them this time with a looping finish.

The game was an opportunity for Swansea to soothe some of the pride injured by Sunday's Premier League derby defeat at Cardiff City.

Also at stake was the chance to secure a place in the last 32 and although Valencia's 3-2 win at St Gallen has knocked Swansea off the top of Group A, they remain well placed despite this second setback against bottom side Kuban.

Swansea need two points from their last two games at home to Valencia on 28 November and then away to St Gallen, while anything less than two victories by St Gallen will also see the Swans safely through.

Michael Laudrup's side travelled without star striker Michu, who was injured at Cardiff, while Pablo Hernandez, Garry Monk and Jonjo Shelvey were also absent.

Bony had already tested Aleksandr Belenov with a firm header before a flowing move ended with the Ivorian sweeping the ball past the helpless Kuban goalkeeper.

Alejandro Pozuelo charged into the area before finding Roland Lamah, who in turn cut the ball back for Bony to net his fifth goal in Europe this season.

Russian football was again in the spotlight after Manchester City's Yaya Toure complained he was subjected to monkey chants during his side's Champions League win at CSKA Moscow.

But there seemed to be no obvious repetition from the Kuban fans who, apart from one individual flashing a laser pen, were content to enjoy a flowing first half.

Cisse could have struck first for Kuban after outpacing Ashley Williams, only to shoot straight at Michel Vorm, while Arsen Khubulov took advantage of a little ring-rust from Swans left-back Ben Davies - back after three weeks out with an ankle injury.

But Swansea had chances to double their advantage before half-time, with Lamah just wide with a left-foot shot while Belenov grabbed Nathan Dyer's goalbound effort.

Cisse did have the ball in the net early in the second half, but Dwight Tiendalli had stepped out just in time to catch the former Liverpool striker offside.

In contrast Bony, so effective before the break, struggled to make any further impact and was withdrawn in favour of Vazquez with 20 minutes remaining.

The Spaniard had barely touched the ball before he was clattered by Xandao and, with the Brazilian booked in the first minute for a silly handball, he was sent off.

A goal down but this time also a man down, Kuban seemed unlikely to repeat their late escape.

But when Swansea failed to clear in time added on, Popov dissected the visitors' defence to find Balde, who acrobatically looped the ball over Vorm.