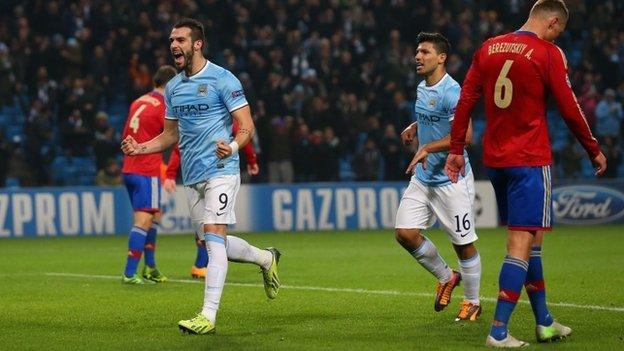 Manchester City manager Manuel Pellegrini says his side are capable of beating any of the teams left in the Champions League after qualifying for the knockout stage for the first time.

City, who failed to progress from the group phase in their two previous campaigns, secured their place in the last 16 with two games to spare after

And Pellegrini, when asked whether his side could overcome any future opponents, said: "I think so - but it is level so any team can beat us also."

He added: "I'm sure the team we will play against [in the next round] will not be very happy to play against us."

Alvaro Negredo's hat-trick and two goals from Sergio Aguero made it a comfortable win for City.

Pellegrini said: "I think we have a strong team. The main target was to qualify for the next round but it is not our only target.

"I don't know if it is a relief but our first target was to be in the round of 16. To be at this stage is important for this club but I always had a lot of trust that we would do it.

"I'm really very happy because it is an achievement the club didn't do in the last two seasons. It is not easy but we have done it two games before the end of the group stage.

"We are going to try and be first in the group. We have to decide the group in Munich against Bayern."

City's remaining fixtures see them host Viktoria Plzen in a fortnight's time before the final game in Munich on 10 December.