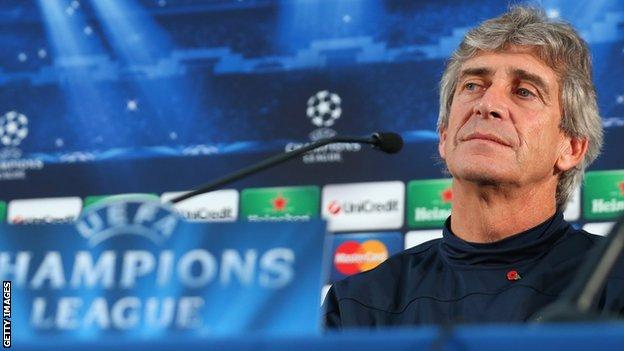 Manuel Pellegrini does not do bullish - but Manchester City's normally deadpan manager was emboldened enough by early qualification for the Champions League knockout phase to let the mask slip just slightly.

Given City's uneasy relationship with this tournament, Pellegrini probably would have signed up for reaching the round of 16 with the last kick of their sixth and final game if it meant at last climbing the hurdle that has proved insurmountable before.

City in the Champions League

2011-12 Third in group, missing out on qualification by a point despite beating Bayern Munich in their final game. Away defeats to Bayern and Napoli cost City.

The Bayern loss was the game in which then manager Roberto Mancini accused striker Carlos Tevez of refusing to come on as substitute.

2012-13 Bottom of a group which included Real Madrid and Borussia Dortmund. City were without a win in the six matches amassing three points from draws.

2013-14 Qualification secured after the fourth game following three wins and a loss.

Instead, the Chilean was able to bask in the relaxation of getting the first part of the job done with two games to spare after the formality that was their 5-2 win against CSKA Moscow.

City's record in the Champions League makes grim reading. No knockout phases. No wins in last season's group stage. This was their first home win at this level since Bayern Munich were beaten 2-0 in a final, fruitless game of their campaign in December 2011.

It is a victory City will almost certainly have to repeat in the Allianz Arena if they wish to finish top of Group D and avoid the pitfalls associated with ending up second going into the last 16 draw.

But Pellegrini was buoyant. Well, buoyant for this most understated of men, as he set his sights on that target and then made an even bolder claim.

For now, after two attempts at the Champions League undermined by tough draws and an apparent lack of belief against the biggest opponents, hitting this first important base is enough.

Pellegrini, however, clearly has great confidence in his team. He should know when to be in such a frame of mind as the man who guided Villarreal to the 2006 semi-final and was only a freak last few moments away from toppling eventual finalists Borussia Dortmund with Malaga last season.

In the cold light of day Pellegrini's assertion does not bear too close scrutiny given City's history, or lack of it, in the Champions League but this has been much more impressive stuff this season.

Aguero and Negredo will be a handful for any defence - but will Pellegrini play both against the better teams if City move further into the competition?

It may be wise for City and Pellegrini to walk before they can run but there is no doubt they have the weaponry to hurt the biggest teams. Their flaw is that they have weaknesses that may mean the big teams will hurt them even more.

For all their fine work in reaching the last 16 so early, their one encounter with elite opposition ended with a harsh lesson being handed out by holders Bayern in a 3-1 win at The Etihad.

So where does Pellegrini find the roots of his optimism? Certainly in the shape of a world-class striker in a rich vein of form with the talent to break down any defence.

Sergio Aguero's penalty that set City on their way made him the club's top scorer in Europe with 11, edging ahead of the great Francis Lee. It was the sixth game in a row in which the Argentine has hit the target and he added a second for good measure.

And his partnership with Alvaro Negredo was simply too much for CSKA, with the Spaniard's hat-trick confirming his status at City's new cult hero.

The powerful, bustling Negredo has been christened "The Beast" at The Etihad and the old Shaun Goater chant of "Feed The Goat And He Will Score" has been rewritten in his honour. Such is his new-found status that he was even announced as "Beast Of The Match" by a PA announcer entering into the spirit of the occasion.

Aguero and Negredo will be a handful for any defence - but will Pellegrini play both against the better teams if City move further into the competition?

He went with two strikers, Aguero and Edin Dzeko, against Bayern Munich and the tactic was swiftly exposed as City were completely overrun in midfield and consequently in defence. Will it make Pellegrini, a naturally attacking coach it should be said, reluctant to using it again?

Samir Nasri could rarely have played better in his City career than he did on Tuesday, a constant creative source, and the graceful David Silva is all subtle touches and danger.

City have options in midfield but there must still be concerns defensively. The only negative about this win was the occasional carelessness that allowed this uninspiring CSKA side opportunities.

It may simply have been complacency as City had it so easy and served as a warning for the greater tests ahead. How they will need the leadership and organisational skills of their outstanding captain Vincent Kompany when the knockout games start.

Fortunately for Pellegrini, his excellence in ensuring City have qualified after four games means he has some extra time to ponder problems and attempt to discover solutions.

For now, Pellgrini and City can be delighted with a job well done. They have finally crossed the Champions League barrier after so much suffering - and if Pellegrini is not allowed some optimism now when is he allowed it?