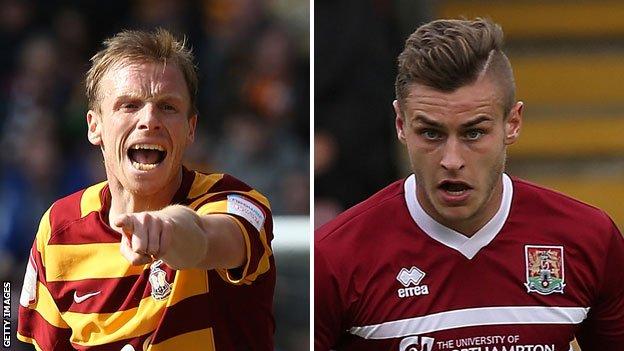 Blyth, 21, will stay until mid-December, while Ravenhill, 32, has arrived on a month's loan.

Both have been cleared for Sunday's FA Cup tie against Bishop's Stortford.

"I found myself out of the team at Bradford and at this time in my career I want to be playing regular football," Ravenhill told BBC Radio Northampton.

"I spoke to the manager and everything was fine. When the call came to come here, I didn't hesitate.

"I'd like to think I can be a leader, and I've been told that through my career. I'm quite vocal, I like to get organised and to make sure we're competing in all areas of the pitch."

Blyth, meanwhile, will be hoping to continue the form he showed in his first Cobblers spell, when he scored three times in eight games.

He also found the net for Leicester City's Under-21 side against Blackburn on Monday, signalling his return to fitness from a thigh injury.

Peterborough loanee Kane Ferdinand is also available for the tie against Bishop's Stortford, who have won their last seven games in all competitions, while Northampton are without a win in their last five.