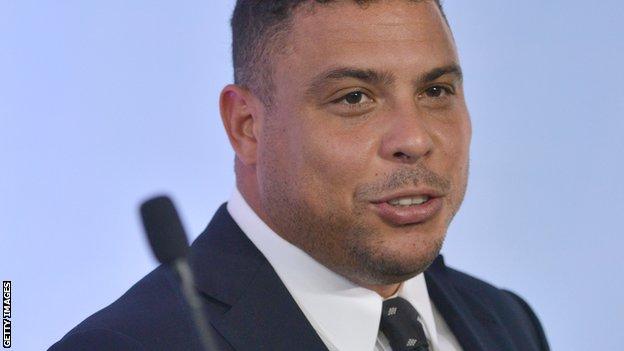 Legendary Brazil striker Ronaldo says next year's World Cup will be a "beginning for change" in his country.

Soccerex cancelled its football conference due to be held in Rio next month, blaming "ongoing civil unrest", although the State of Rio and World Cup organisers dispute that reason.

But Ronaldo said: "The latest polls show that 90% of Brazilians are in favour of the World Cup.

Ronaldo: career of a legend

"We need to use this World Cup to call for more investments."

Now a World Cup 2014 ambassador, Ronaldo was speaking before Soccerex's surprise announcement,, although the BBC understands the Rio State Government felt it could not justify spending money on a football event because of the pressure being applied by the civil unrest.

However, Ronaldo - who helped Brazil win the 2002 World Cup in Japan and South Korea - believes the tournament could be a catalyst for improvements in Brazil.

He added: "In terms of the World Cup, we made huge strides, with great results and great investments - not only in stadiums, but also in infra-structure, urban mobility, airports. These are important investments for Brazil.

"The last time I visited a stadium was in Mato Grosso, the Arena Pantanal. We had dinner with the governor and what we saw is that there were public works all over the city of Cuiaba.

"He told us: 'Thanks to the World Cup, we are now able to invest in our city.' So I think the World Cup is a beginning for a change in Brazil."

Despite the unrest, Ronaldo believes the majority of Brazilians support next year's tournament.

"What people are protesting in the streets is just and fair, as long as they are not violent. We do need to protest for a better Brazil.

"It's a small part that is against the World Cup. The latest polls show that 90% of Brazilians are in favour of the World Cup and 70% think the World Cup is very important for developing our country, so we have popular support."

Ricardo Trade, the chief executive officer of Brazil 2014, echoed Ronaldo's thoughts and is equally optimistic next year's tournament will be a success.

"We are having a lot of protests - not related to the World Cup - about health, education, teachers in Rio de Janeiro," he said.

"The government said they will be prepared - there is no plan B."