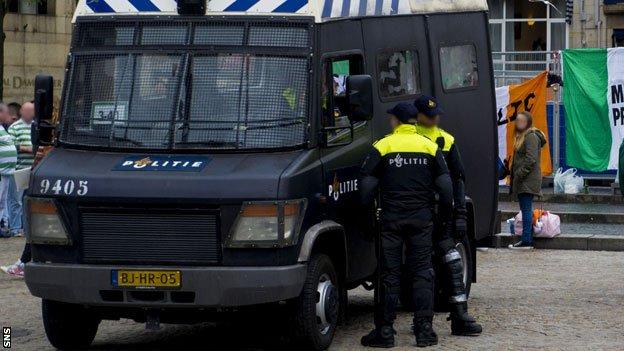 Amsterdam Police say an attack by a group of Celtic fans ahead of the Champions League game against Ajax has left eight officers injured.

The clash between supporters and police came in the centre of the Dutch city before kick-off at Amsterdam Arena.

"There were 15 arrests, mostly Celtic supporters," said a police statement.

"At the end of the afternoon, a large group of Celtic supporters attacked police officers in plain clothes. Eight were injured and one left unconscious."

Celtic had earlier issued a warning to their fans to be "extra vigilant" in Amsterdam following an attack on their supporters on Tuesday.

Police said the majority of those arrested in the latest incident were Celtic fans, although it is believed that supporters from other clubs were also involved.

"Bottles and sticks were used in the attack, which came out of nowhere," they said of the fighting in Dam Square.

Police said a few officers "had broken noses and needed stitches above their eyebrows and on their lips".

Celtic lost the match 1-0 and face an uphill battle to reach the knockout stages of the competition.

In Tuesday's incident, a group of visiting supporters in the Dutch capital were involved in a violent incident in a city-centre bar.

Celtic subsequently told fans to "only stick to advised areas for safety reasons".

Some 12,000 Celtic fans were expected to be in Amsterdam for the Group H match.

"The attack in the city centre by an element of the Ajax support resulted in a number of arrests.

"Celtic are urging all supporters to be extra vigilant in the city centre and at the Amsterdam Arena."

Celtic beat Ajax 2-1 last month and Uefa opened disciplinary proceedings against the Dutch club after some of their supporters clashed with police and stewards and damaged seats at Parkhead.