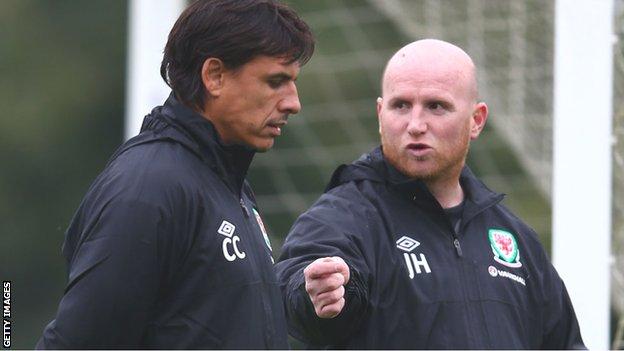 John Hartson is standing down as assistant manager of Wales.

The former Wales striker has been a member of Chris Coleman's staff during the 2014 World Cup qualifying campaign.

"I've enjoyed every moment of my time with Wales," he said. "Everyone knows how passionate I am about my country.

"The work I now do as a pundit for the BBC is taking up more of my time. With another child on the way I need to spend some time with my family."

"We are all aware of his passion for Welsh football and hope that he can continue to play a role in the development of the game in Wales at all levels."

Hartson was appointed to Coleman's staff in the summer of 2012 after the former Fulham manager took over following the death of Gary Speed.

Wales failed to qualify for the World Cup in Brazil and Coleman's contract comes to an end following the friendly with Finland on Saturday, 16 November.

Coleman has been linked with the vacant manager's role at Premier League side Crystal Palace.

Hartson had successful emergency surgery in 2009 after he was diagnosed with testicular cancer that had spread to his lungs and brain.

In October, he said that he had offered to resign "a couple of times" following criticism of the Wales team and management during their unsuccessful World Cup campaign.

However, his resignation this time was unexpected.

"I have learnt a lot working with Chris, Kit [Symons] and Osian [Roberts]," he said. "I wish them and the players all the best for the future and really hope they qualify for the UEFA European Championships in 2016."