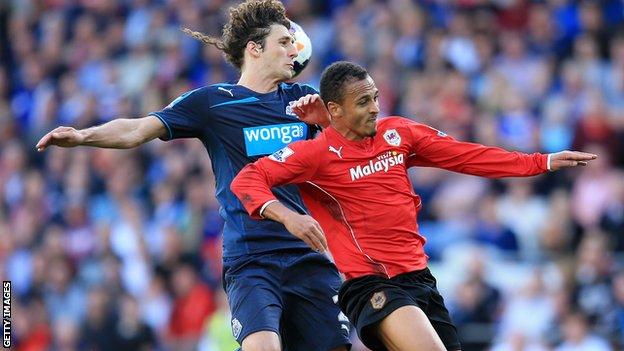 The Argentina centre-half has not played in over a month, last appearing in

With and without Coloccini

Since then, the Magpies have sandwiched a with a and

"It's the first time we've coped with losing Colo. Central defence is an area I think our fans worry about so it's a huge boost," Pardew told BBC Newcastle.

Newcastle have suffered numerous injuries and suspensions to centre-halves this term, meaning inexperienced full-back Paul Dummett was utilised in the middle against Sunderland last month.

Before October's game with Everton, Mike Williamson had played 90 minutes this term. He came on at half-time and has since played every second.

He has been training this week after recovering from a groin strain and could return for the despite Mapou Yanga-Mbiwa, 24, and Mike Williamson, 30, keeping out Chelsea in a 2-0 win.

"Credit to the players who have come in while Fab has been out. I think Mike Williamson in particular has been fantastic," Pardew continued.

"Yanga is still learning and it's my view that centre-halves are at their peak between 32 and 36 years of age because it's not until you have that experience that you blossom.

"Against Chelsea, Mike was so mature, he's learned the little tricks of the trade and used them to good effect."