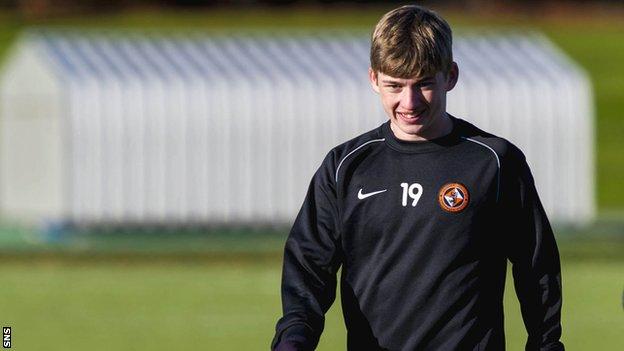 Dundee United midfielder Ryan Gauld has been given a first call up for Scotland's European Under-21 Championship qualifier against Georgia.

The skilful 17-year-old has scored three goals in 13 appearances for United this season.

The match on 14 November is taking place at St Mirren Park with a 19:30 GMT kick-off.

Stark's side have already beaten Luxembourg and Slovakia in Paisley but have lost their two away games in Group 3, to Netherlands and Georgia.

The Dutch and Slovakians lead the qualifying section on nine points, with Netherlands having played one game less and with a 100% record.

Gauld, who this week signed a contract extension at Tannadice, has impressed Stark with his performances for the national Under-19 side as well as his club in the Scottish Premiership.

"We have always set out to qualify and, in the process, blood younger players if we can and we are doing that," said Stark.

"In terms of qualification, it's a big game for us. In this competition, in every game you go into, there is not much margin for error.

"We did target doing better in our home games in terms of wins.

"The last time, we drew with Holland, Austria and Bulgaria. In general, they were pretty good performances - we just didn't have the edge to get the winning goal.

"In the two home games so far (in this campaign) we have had good performances and we've won the games so that augurs well.

"If we can win our home games and take something on the road, it puts us in with a chance."