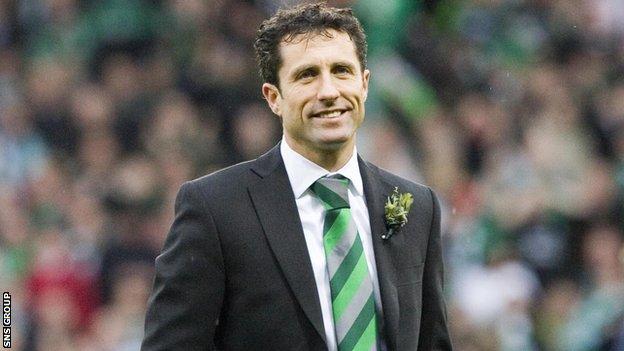 Former manager John Collins thinks Terry Butcher could move Hibernian in the right direction as long as there is no "interference from above".

Collins resigned from Hibs in December 2007, citing frustration over his player budget.

"If he's left to get on with the job and do it the way he sees fit then I'm sure he'll do well," he said.

Terry Butcher's done an outstanding job at Inverness, there's no doubt about that

Caley Thistle hope to retain the former England captain, but the 56-year-old did not accept the new deal he was offered in the summer.

Explaining his departure, Fenlon, who stepped down after nearly two years in the post, said the club "have been 100% behind me in every way".

But Collins, who won the League Cup with Hibs in 2007, told BBC Scotland that he felt constrained during his 14 months in charge.

"Well, it's a big job of course, but as happened when I was at Hibs, there was a little bit of interference from above," said the former Scotland midfielder.

"Previous managers have struggled to get the performances and the results right, so hopefully if Terry gets the job then he can take Hibs forward.

"He's done an outstanding job at Inverness, there's no doubt about that.

"Hibs have a terrific infrastructure in place now, with the stadium and the training ground, so what they need now is a team that entertains on the park."

Collins was succeeded by Mixu Paatelainen, while John Hughes and Colin Calderwood had time at the helm before Fenlon arrived in November 2011.