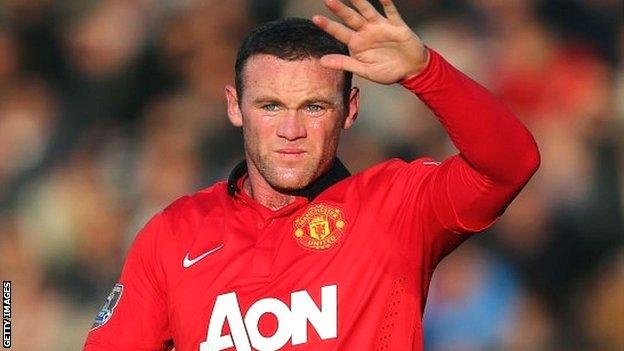 The Gunners are five points clear at the top of the Premier League after 10 games and eight points ahead of United.

"We've seen before that they've been in the top two until February or March and then faded away," Rooney said.

"They are doing brilliantly at the minute, so it's down to them to try and stay there and us to catch them.

"We'll have to wait and see where Arsenal are in March."

Champions United lie eighth in the table and host Arsene Wenger's team having recovered from a difficult start to the David Moyes era in which only one point was taken from early season fixtures with Chelsea, Liverpool and Manchester City.

Tuesday's goalless draw at Real Sociedad extended their unbeaten run to eight matches and Rooney said: "We're obviously capable of beating Arsenal, we've done it many times in the past."

The Gunners, who have not won a major trophy since 2005, are unbeaten in the league since a 3-1 home defeat by Aston Villa on the opening day of the season, winning eight out of their subsequent nine league encounters.

"They're on a good run of form at the moment and they're top of the league, so we know it's going to be a difficult game," added Rooney, who scored a hat-trick when United beat Arsenal 8-2 in the corresponding fixture in August 2011.

"We know we're capable of playing better and we're trying to do that. It's up to us to keep trying to pick up points and then, come Christmas, see where we are.

"We had a whole new set-up and different ideas from the manager. It was a bit of a change but we're starting to show the things that the manager wants.

"We're starting to do well. We're confident at the minute, we're getting more clean sheets and playing with freedom.

"If we can get the victory on Sunday then we're in a great position."