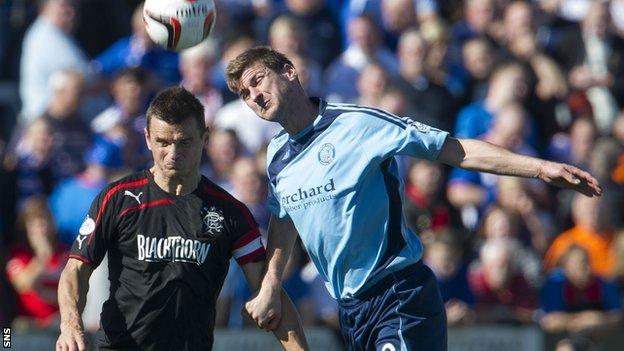 Rangers' home League One fixture against Forfar Athletic on 16 November has been postponed because four home players will be on international duty.

SPFL rule G7 entitles a club to apply for postponement if three or more players are away with their country.

The Ibrox club hope to reschedule the game for early December.

The club appreciates supporters may be unhappy with the decision, but it was taken in good faith by the football department.

It is the second time Rangers have postponed a match in such circumstances this season.

Their 12 October game against Dunfermline Athletic was rescheduled for 6 November.

With only 10 days to go until the Forfar fixture was meant to take place, Rangers acknowledged that the decision might not be popular with some fans.

A statement on the club website said: "The club appreciates supporters may be unhappy with the decision, but it was taken in good faith by the football department.

"We hope to reschedule the game for Tuesday, 3 December, or Wednesday, 4 December, but this will only be confirmed once the date for our Scottish Cup tie against Falkirk is confirmed - which is scheduled for the weekend of the 30 November."

Peralta has been selected for Honduras to play Brazil, while Wallace is included in the Scotland squad for the double-header against the United States and Norway.

Scotland Under-21s face Georgia, while the younger squad is in a two-day training camp.