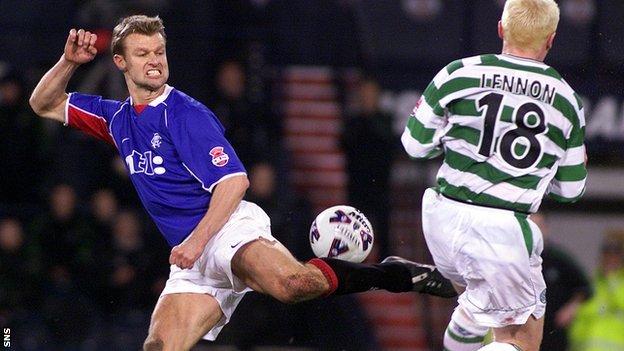 Rangers and Celtic have fourth round ties to contend with against Falkirk and Hearts, respectively.

"It would be great to see Rangers play against Celtic," Numan told BBC Radio Scotland.

"But on the other hand, Celtic at the moment are a little bit too strong. But in the cup, everything is possible."

The 45-time capped Netherlands international won the Scottish Cup three times with Rangers during his time at Ibrox between 1998 and 2003.

"It's not realistic if you compare the Rangers team with Celtic," he said.

"Celtic have a far better team, the better players and more experienced players. Rangers have a team full of youngsters who can only learn from this.

"To be honest, I'm already looking forward to Rangers and Celtic playing against each other.

"But to be honest the atmosphere between Rangers and Celtic, to me, is still the best. Hopefully within two years' time they [Rangers] will be playing in the Premier League again."

Numan has followed Rangers' League One progress with interest this season and is delighted to see them hold a commanding lead at the top of the division.

And he hopes the youngsters playing in the first team benefit from being exposed to so much football early on.

"They are flying [in League One] but I didn't expect anything less than that," added Numan.