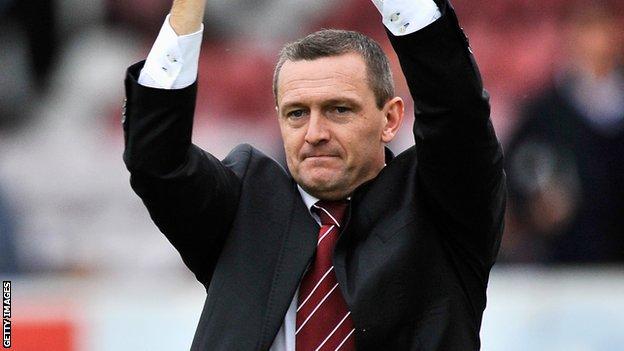 Northampton Town boss Aidy Boothroyd has said he could be out of a job now with a less supportive chairman.

The Cobblers, with one win in their last 13 league games, are bottom of League Two.

"Thankfully I've got a chairman who's supportive otherwise I could've been down the road [sacked] by now," he told BBC Radio Northampton.

"But thankfully he recognises what he's got - somebody who wants the team to do well and who is working hard."

Chairman David Cardoza has backed his manager, saying that while he would be "extremely unhappy" if they lost to Conference South side Bishop's Stortford in Sunday's FA Cup first round tie, a defeat would not prove decisive to the manager's future.

"It's not been good enough this season - it's been way short. But I'm not going to be throwing him and his staff under the bus," he said.

We're bottom of the league, conceding far too many in the last minutes of games and frankly I've had enough of it

Former Watford and Coventry boss Boothroyd has enjoyed success at Sixfields until this season, saving the club from relegation at the end of the 2010-11 campaign and taking them to within a game of promotion last term by losing the play-off final.

But, following an overhaul of his squad and a series of loan signings, the Cobblers have registered just two league wins this season.

"I do get concerned because I do want to be here and I like it here," said Boothroyd.

"I'd be lying if I said I wasn't concerned. I've been in management for eight or nine years and I've been sacked twice.

"I've got a chairman who is grateful for last year and perhaps the year before. He's very understanding and patient. He's as frustrated as any of us, and perhaps more, because it's his money."

"I felt it was time to change. The core of the team is in the treatment room at the moment," he added.

"But we're bottom of the league, conceding far too many in the last minutes of games and frankly I've had enough of it."