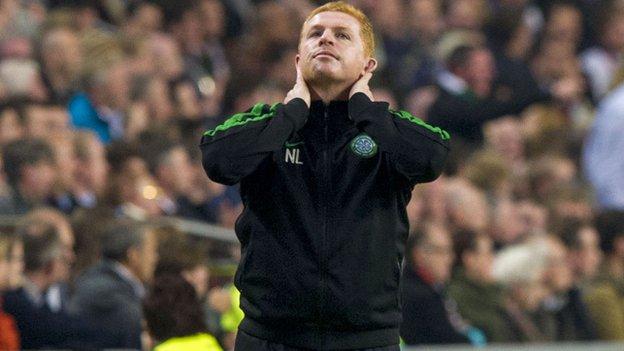 Neil Lennon labelled Celtic as "insipid" after their 1-0 Champions League defeat by Ajax but says their last 16 hopes remain alive.

Lasse Schone's neat second-half winner leaves Celtic needing a victory at home to AC Milan on 26 November to give them a realistic chance of second place.

"It's an opportunity lost, but all is not lost," said Lennon.

"The whole thing could flip again if we beat Milan and Barcelona take something off Ajax."

Celtic now sit bottom of Group H with only three points from four matches, Ajax having overtaken them with their win in the Dutch capital.

"We have to beat Milan now," said Lennon. "It's imperative we do that to have any chance of qualification.

We could've done better with the final ball and that's been a concern for the last few weeks now, domestically and at this level.

"I think some players will have regrets about the game tonight because they were nowhere near their best. At this level, you can't have that.

"We looked second best in the forward area and we were insipid in the first half.

"We didn't work the goalkeeper enough for my liking. We could've done better with the final ball and that's been a concern for the last few weeks now, domestically and at this level."

Celtic goalkeeper Fraser Forster was called upon to make two crucial saves in a first-half that Ajax dominated.

The Englishman dived at full stretch to turn Stefano Denswil's free-kick round the post before doing the same to Siem de Jong's header.

The visitors' first real chance came early in the second half when Beram Kayal careered through the middle only to balloon his shot over.

Celtic were immediately made to regret that miss, with a slick one-touch passing move ending with Schone scoring in the 51st minute.

"When Schone got the goal, we were just starting to get a foothold in the game," said Lennon.

"We missed some decent opportunities, particularly the James Forrest one where we're two v one. You're thinking 'goal' and that would've got us back in the game."

Emilio Izaguirre had to be alert to clear a Schone corner off the line in the second-half and Denswil hit the post with a late header.

"We have to play better," added Lennon. "Our play in general was not like us.

"There were some good performances but predominantly from players in my back four and midfield. We have to regroup."