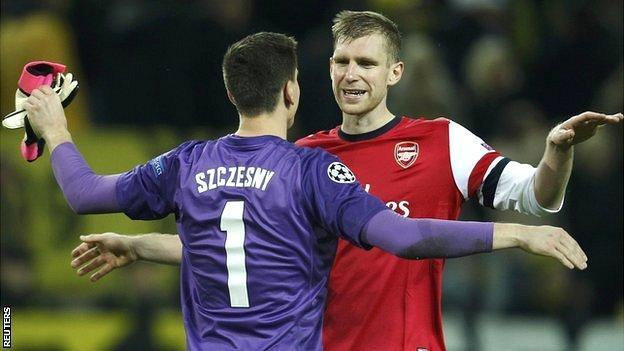 Borussia Dortmund boss Jurgen Klopp believes Arsenal can win the Champions League - if they avoid fellow German side Bayern Munich in the draw.

Aaron Ramsey was on target as Arsenal beat Dortmund 1-0 on Wednesday to stay top of Group F with two games left.

The hosts had come into the match looking for an eighth successive home Champions League win having never lost to an English side.

"They could win it - as long as they don't play Bayern Munich," Klopp said.

"They are young, healthy and good technicians. They won a clever game tonight."

Ramsey's strike was his 11th for Arsenal in 17 games this season.

His form has been one of the factors in Arsene Wenger's side topping the Premier League after 10 games.

The Gunners are five points clear of second-placed Chelsea and have scored 22 top-flight goals this season.

Holders Bayern clinched their place in the knockout stages by beating Viktoria Plzen on Tuesday.

Last year's runners-up Dortmund may need to win their remaining two games to progress to the last 16.

They trail both Arsenal and Italian side Napoli - their opponents in their next group game on 27 November - by three points.

Klopp, who lost the Champions League final and his side's domestic title to Bayern Munich last season, is braced for a tense finish to the group, but confident Dortmund will survive through to the knock-out stages.

"It is a very strong group and the positive news tonight is that two wins and we will qualify," he said.

"We created much more today up front but they scored with their first chance of the match and we could not come back. This defeat could have been avoided.

"It's definitely going to get exciting from now on."

Arsenal have never won the European Cup, finishing as runners-up to Barcelona in the 2006 tournament in their most successful campaign.