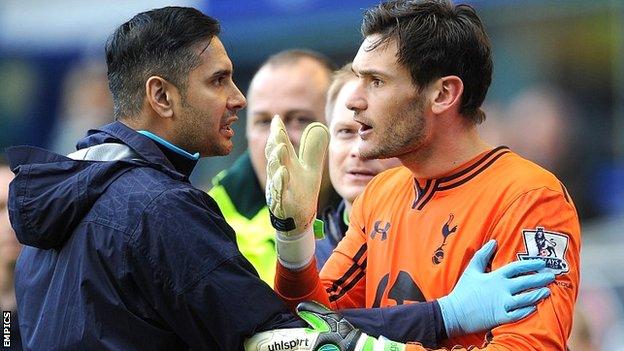 Tottenham goalkeeper Hugo Lloris was knocked unconscious after a collision with Toffees striker Romelu Lukaku but continued after lengthy treatment.

"If there is a strong view from the medical side that a concussed player should come off we should look into it and make a rule," said Martinez.

"I don't think it should be a manager's decision whether you take a player off or not.

"It should be part of the game and a law. It would be very unfair to be a manager in a position where you have to take a player off just to avoid any sort of risk without having that medical knowledge."

All clubs shall ensure that any player having left the field of play with a head injury shall not be allowed to resume playing or training without the clearance of a qualified medical practitioner. The same provision shall apply where a head injury is sustained in training.

World players' union Fifpro, the Professional Footballers' Association and brain charities were all critical of Villas-Boas after he said Lloris could continue in goal following the injury, which occurred late in the second-half of Sunday's goalless draw at Goodison Park.

"If anyone suffers severe trauma to the head and loses consciousness, they should be required to leave the field," said the PFA's John Bramall.

Fifpro medical advisor Vincent Gouttebarge said his organisation: "condemns that the health and safety of players are left to coaches, trainers or even to players themselves."

Villas-Boas was incensed with the comments, stating he was happy to be guided by the Spurs medical team, led by highly-respected club doctor Shabaaz Mughal and physio Geoff Scott, who were instrumental in saving the life of Bolton's Fabrice Muamba after he suffered a cardiac arrest on the pitch at White Hart Lane in March 2012.