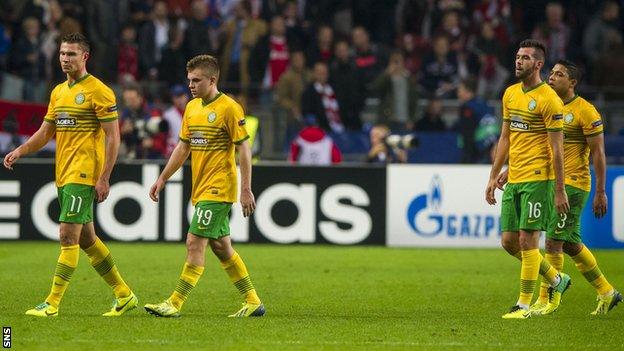 Celtic came to Amsterdam brimming with confidence, sure of their ability to emerge from the game with at least a point, if not all three.

Two very good performances - albeit in defeat - against Milan and Barcelona as well as the victory over Ajax at home had rightly fuelled that belief.

Seldom had Celtic gone into an away game in the Champions League with such positivity.

But almost from the off in the throbbing atmosphere of the Amsterdam Arena, that confidence appeared as misplaced as many of Celtic's passes as the under-pressure hosts took charge and limited their visitors' opportunities to record a second win in as many weeks.

In contrast to Celtic, Ajax's confidence going into the game was supposedly flimsy at best, with only one win - over an amateur side in the cup - in their previous five games.

Yet while this Ajax side is a shadow of some of its famous predecessors, the Dutch champions were significantly better than their opponents all over the park.

For Neil Lennon, the performance must have been as baffling as it was infuriating.

Players who had previously reserved their best for Champions League nights looked out of sorts, with only recent absence through injury partially excusing Georgios Samaras and Kris Commons their ineffective displays.

This was as close to full-strength as Lennon could have hoped to be in the enforced absence of his captain Scott Brown.

But the much-vaunted attacking line-up misfired badly, with James Forrest incapable of causing any noticeable panic down the Ajax left and guilty of a potentially point-saving fluff when he should have picked out the unmarked Anthony Stokes.

The absence of Brown, though, was keenly felt. Charlie Mulgrew and Beram Kayal were unable to replicate his ability to press the opposition and drive on his team-mates.

His reckless kick-out at Neymar in the home game against Barcelona is looking increasingly damaging.

Not only can it be reasonably argued that his dismissal cost Celtic at least a point in that game, there is every chance he could have helped his side earn a valuable point in Amsterdam.

could yet cost Celtic a place in the last 16 as well as the accompanying kudos and financial benefits.

But, as , all is not lost and three weeks from now Celtic could be sitting second in the group if they can overcome Milan - by no means unrealistic - as long as Barcelona do them a favour by beating Ajax.

That might leave them needing something from the final match at Camp Nou, but at the very least they would be guaranteed third spot.

With just three points from four games, though, Celtic can consider themselves fortunate to remain in contention for a place in the last 16.