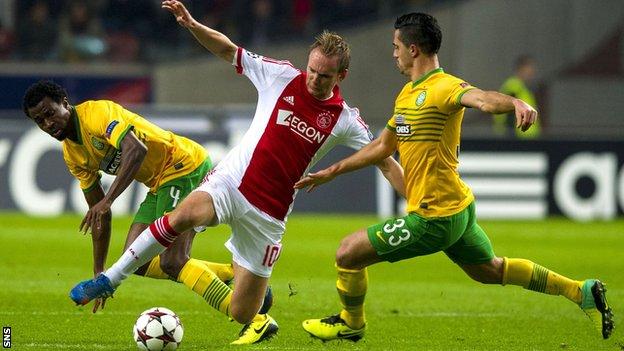 left Neil Lennon's side bottom of the section, a point behind Ajax.

"We'll never give up until the last minute."

Team-mate Beram Kayal feels victory in Celtic's next group game against AC Milan in Glasgow would set them up nicely for the section closer against Barcelona.

"Always, we believe we can do something," said the midfielder. "We're not coming just to say we are in the Champions League, we proved that last year and we want to prove that this year also.

"The manager gave us the belief. We still believe. Everything is possible.

"Just looking to the next game, it's going to be tough. Celtic Park is always hard for every team coming.

"We'll try to do the best and hopefully we can win the game. With six points in the group, it would put us a good position."

"Celtic still have a chance, they are still only two points behind Milan," he said.

"There was more pressure on us after the game in Scotland [when Celtic won 2-1] so we are relieved.

"We have still to go to the San Siro. We also have to play against Barcelona and a point will be a bonus point.

"They are already qualified and we have nothing to lose.

"We know if we play like we have to play, and the way we used to play, we know we can win and we deserved to win [against Celtic].

"The first half was very good, we had some good moments and we were very happy to score to make it 1-0 but we forgot to score the second which would have made it easier for us.

"But we looked a bit tired and maybe that is why."