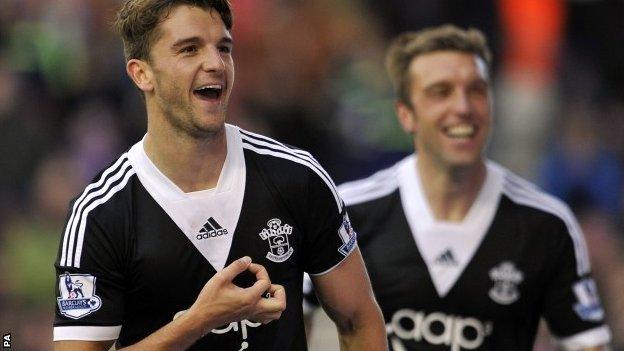 Southampton striker Jay Rodriguez has been given his first call-up to the England squad for this month's Wembley friendlies against Chile and Germany.

"[Manchester United forward] Danny Welbeck has been injured - I see in Rodriguez someone who could fill that Welbeck role," said Hodgson.

"He's a wide forward who likes to go forward and attack people even without the ball and get in the penalty box."

England play Chile on 15 November and Germany four days later. Both opponents have qualified for Brazil 2014.

Rodriguez applied to do a plumbing course as a teenager in case he failed to make the grade.

But he excelled at Burnley and his 41 goals for the Clarets led to a move to Southampton for a fee of £7m in June 2012.

He has scored 13 goals since the move and been a key factor in Southampton's surprise start to this season, which has left Mauricio Pochettino's team sixth in the Premier League.

Midfielder Lallana, 25, has not been in the England squad since his only call-up in September 2012, although he did not feature in 1-1 draw with Ukraine.

Hodgson added: "Adam was with us once a long time ago. We saw him in training, we have been following him closely and he played a major part in [Southampton's] rise to the top. It was quite obvious we would pick him."

Rickie Lambert is a third Southampton player to be named by the England manager.

Hodgson has also kept faith with Hart, despite the keeper losing his place at Manchester City following a series of high-profile mistakes.

"I don't think he'll start both [games] because it is important for me to look at one of the other two, possibly both," said Hodgson.

"But I can say Joe will definitely start one because he is our number one goalkeeper. I would guess more likely Germany than Chile, but I wouldn't like to be held to that."

Henderson last played for the senior side in the defeat by Italy at Euro 2012 but has been a regular for Liverpool this season. Reds team-mate Glen Johnson returns to the squad following injury.

England have not played Germany since losing 4-1 to them in the second round of the 2010 World Cup in South Africa.

Joachim Low's side qualified for Brazil 2014 with an unbeaten record in Group C, while the South Americans secured their place on Tuesday with a 2-1 win over Ecuador.

This will be Chile's first match in England since 1998, when two Marcelo Salas goals gave them victory over Glenn Hoddle's side.

England booked their place at the World Cup by beating Poland 2-0 at Wembley on 15 October.