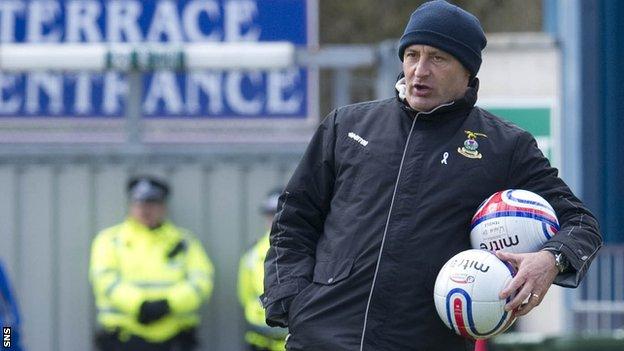 Assistant manager Maurice Malpas is urging Inverness CT to focus on the task of facing Hibs as the Highlanders await news on their manager's future.

about the vacant job at Easter Road.

"The decision is Terry's decision - we are waiting on that," said Malpas after overseeing training on Thursday.

"The players can't have any influence in it. We have got a job to do and it's important the players do their job.

Pat Fenlon left Hibs last week and Jimmy Nicholl has been placed in temporary charge of the first team.

Butcher led Inverness to fourth place in last season's Scottish Premier League - the club's highest ever finish - and they are currently third in the top flight, four places and seven points ahead of Saturday's opponents.

"A lot of people have been saying this and saying that," added Malpas, who worked under Butcher at Motherwell before the pair joined Caley Thistle in 2009.

"We have been trying to make sure the players are concentrating on playing against Hibs on Saturday and getting their preparation correct.

"There has been a lot of speculation. Everyone knows what stage we are at just now.

"Until anything else happens it's business as usual.

"We are trying to keep the routine the same.

"It has been difficult because there has been a lot of speculation, but we are trying to keep it low key and get on with it."

And, when asked if the timing of this weekend's meeting of the two clubs had intensified the situation, Malpas responded: "That's life, there is nothing we can do about that.

"We have to prepare and try and get three points like every other Saturday.

"I don't think people realise how much preparation goes into a game. It's important we have it right and give the players the best chance to get a victory."