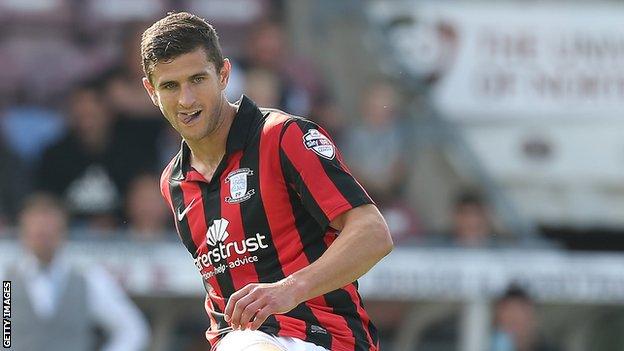 The versatile 27-year-old was by then-manager Graham Westley upon his in the summer of 2012.

But a torn hamstring early in his Preston career

Mousinho, who has made 32 appearances for North End, is eligible to make his debut for the Gills against Brackley Town in the FA Cup on Saturday.

He previously played under Gillingham's interim boss Peter Taylor during a two-year spell at Wycombe.

He is a good professional and he wants to improve all the time. He will fit in perfectly with our spirit and what we want on the pitch

"I'm pleased because we have had a couple of little injures, so to add to the squad is good news for us," Taylor told BBC Radio Kent.

"I know John well and he did very well for us at Wycombe. He is a good athlete and it is good for both parties. He will fit in perfectly with our spirit and what we want on the pitch.

"His agent contacted me to say 'Would you fancy something?' I said yes. [But] I wasn't expecting to do anything before this weekend."

Meanwhile, Taylor believes the Gills are set to appoint a permanent manager ahead of the trip to Sheffield United on 16 November.

Taylor has won two of his four games in interim charge, but does not believe Mousinho's arrival is an indication that he will be handed the reins full-time.

"I'm am honestly not any clearer on that," he said.

"The chairman [Paul Scally] is coming over this weekend. I think the only way it would have been a big, big hint is if he [Mousinho] signed a five-year contract or something.

"For a loan, where we know he is a good lad that will only help the situation, I don't think that guarantees anything."