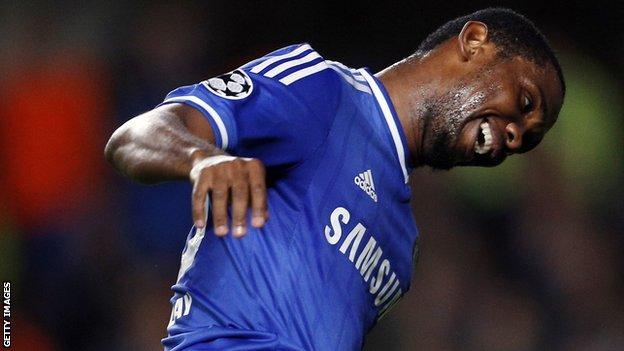 Chelsea manager Jose Mourinho has backed striker Samuel Eto'o to continue improving as he gets fitter following a slow start to his Blues career.

Eto'o, who joined from Russian club Anzhi Makhachkala in the summer, scored twice in the 3-0 win over Schalke in the Champions League on Wednesday.

Mourinho said: "It was not a surprise for me that he arrived not in the best conditions after two years in Anzhi.

The Portuguese coach added: "He's not a heavy body. He's intelligent, of course, and I think goals give confidence.

"Samuel worked with me in the best season of my career (at Inter). We won everything. So he's in a good position."

The Cameroon striker looked sluggish when he first arrived at Stamford Bridge and came in for some criticism as he managed only one goal - against Cardiff - in his first six games.

Mourinho feels that was down to a lack of competition while Eto'o played for Anzi, who he joined from Italian giants Inter in 2011.

Eto'o's contribution has also brought praise from team-mate John Obi Mikel, who said the Cameroonian's goals on Wednesday "showed he is a world class striker".

"What Eto'o brings to the team is experience; he has won the Champions League three times, Spain's La Liga three times as well as the Italian Serie A," Mikel told BBC Sport.

"He is such a great player and a great character to have around in the dressing room as well, and hopefully he will score more goals to help the club win trophies."