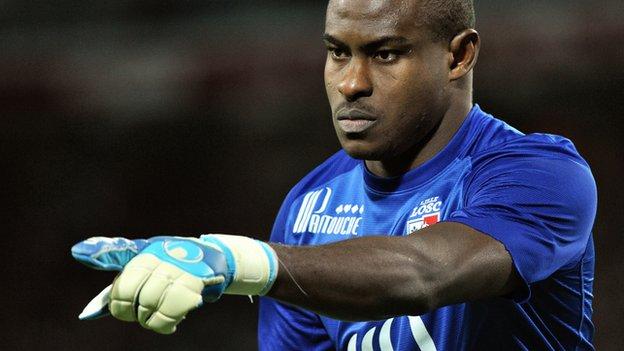 Vincent Enyeama has insisted he is just doing his job after keeping a seventh successive clean sheet for Lille in the French Ligue 1.

On Sunday the Nigeria international kept out Radamel Falcao's powerful effort and denied Emmanuel Riviere at close range as Lille beat Monaco 2-0 to close to within two points of leaders Paris St-Germain.

The 31-year-old, who retuned to Lille this summer after a season on loan at Israeli side Maccabi Tel Aviv, has now kept 10 clean sheets in 12 league games.

"Credit to the team for a brilliant job, I made the saves, but that's my job," he told BBC Sport. "I'm not taking these clean sheets as a personal success or glory because it's a collective effort.

"I was very pleased with my performance, but the people in front of me - and substitutes when they come on - always put in a great shift and I think we have more than 15 heroes."

Players and officials of Lille have been lining up to sing the praises of Enyeama in the wake of his excellent form.

Sunday's performance, where he shut out an expensively-assembled Monaco side, earned him a place in L'Equipe's team of the week and Lille captain Rio Mavuba joked: "We have Jesus in goal. He was huge on Sunday night."

However, Enyeama says he is surprised by all the accolades and only hopes the clean sheets will boost his side's quest for the title.

"It happened before in Israel after the Nations Cup success in South Africa. It was something like seven clean sheets out of 10 games in Israel," he said.

"I also remember that with the national team I went 10 games without conceding a goal at some point.

In April 2004, Enyeama was on trial at English side Bolton Wanderers but a deal never materialised. He was recommended by then-Nigeria captain Jay-Jay Okocha, who was already at the club.

"People are only talking about this because it's happening at a top European league but I have God to thank for that.

"We are taking every game as it comes. The target is to finish top of the league, that's always been Lille's target every season."

And while the stopper may be getting all the headlines in French football, his feet remain firmly on the ground.

"I know strikers are desperate to end this clean sheet so it will eventually come to an end someday," he said.

"But what is important for now is to keep doing my best with Lille. I'm aware life is not always a bed of roses.

"When I got here from Tel Aviv I couldn't get regular football so I went back to Israel on loan for a season just for that.

"God has been good to me so I have no regrets, it is just great to be part of footballing history here.

"I'm not obsessed with keeping a clean sheet forever. I just want to help my club and make our fans happy," he added.

Enyeama has been Nigeria's number one since the 2002 World Cup, other than a small period in 2008 when then-coach Berti Vogts preferred Austin Ejide, and he will line up for the Super Eagles in their World Cup play-off against Ethiopia on 16 November, helping his side defend a 2-1 lead from the first leg.