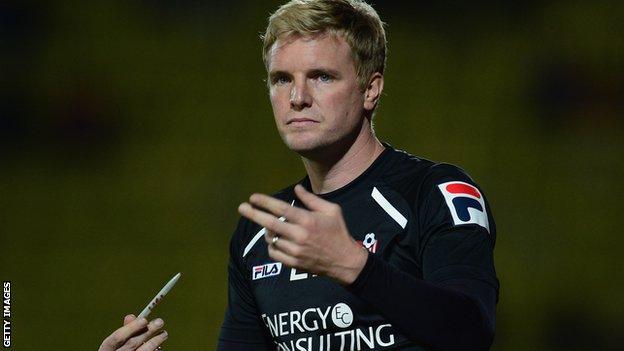 Bournemouth boss Eddie Howe has played down his return to Burnley and says he is pleased his old club are doing well.

Howe rejoined Bournemouth in October 2012 and on Saturday takes his Cherries team to Turf Moor for the first time since he left there.

Burnley currently top the Championship, with the Cherries in 15th position.

"I'm prepared for the media build-up, but for me it's another game against a side who have done very well," Howe told BBC Radio Solent.

Howe finished 13th in his only full season at Burnley before leaving for personal reasons and has no regrets about his time there.

"They are a really good club, with really good people and were very supportive of us. They backed us and made us feel very welcome, and I am very grateful to everyone for that," he said.

"The job didn't always go as we wanted, it was a tough assignment and a tough project. They were a team that had just been relegated, wanted to rebuild and had to cut their cloth accordingly and bring in younger players."

Howe insisted he took pride in seeing the Clarets at the top of the Championship under his successor Sean Dyche, but was not jealous of their success.

"It gives me immense satisfaction to see the club doing because I've played a small part in that," he said.

"I think Sean Dyche and his team deserve all the credit for what they've done in terms of putting the club where they are."

Former Bournemouth players Danny Ings and Sam Vokes were signed by Howe while he was manager at Turf Moor and have scored a combined total of 22 league goals so far this season and he said he took enormous satisfaction in their progress.

"We got stick for the amount of ex-Bournemouth players we were signing," he recalled.

"No one was really aware of Danny Ings when we signed him. Sam Vokes had been on loan at several clubs and needed to find a new club, so I'm pleased for them that they have done well.

"They are great lads, great characters and deserve success and I'm pleased they are playing as well as I hoped they would when I signed them."