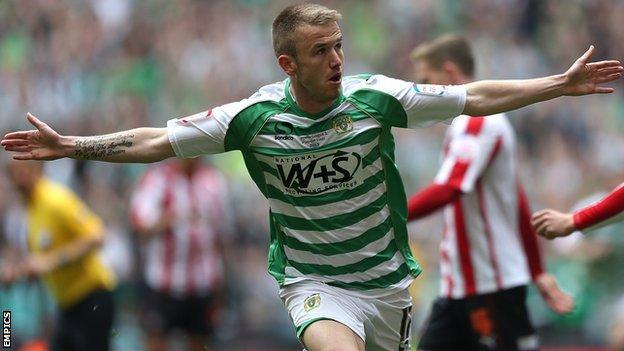 Madden, 23, has been dropping in and out of the squad this term and has failed to score in 9 games.

After being left out against Brighton last month, Johnson told BBC Somerset the forward was "not up to it"

But the Glovers boss revealed: "We had a big chat at the hotel [before defeat by Leeds] and he's ready to come back."

He's ready to show me he's the enthusiastic, Irish striker that I picked up at Bristol Airport 12 months ago

Johnson continued: "Paddy had a bit of a poor spell and words were had. He was a bit disappointed with life and wasn't enjoying his football.

"But I'm pleased to say we've made a new signing this week. He's ready to show me he's the enthusiastic, Irish striker that I picked up at Bristol Airport 12 months ago."

Republic of Ireland international Madden scored 23 goals last term to help Yeovil achieve promotion to the Championship via the play-offs.

But the striker found himself substituted at half time in his first game of the season against Millwall and has only made five starts since then.

"I said publically that he knows what he has to do to get back in the team," added Johnson.

"He had to start enjoying his training and his games, and taking in information we were trying to get through to him.

"He'll be the first to admit it hasn't gone quite right for him but hopefully we'll see a new Paddy."

Johnson's attacking options have taken a hit this week after loanee Andy Williams was ruled out for rest of the campaign with a cruciate knee injury.

Williams, 27, left the Glovers to join Swindon last year, but returned to Huish Park on a season-long loan in the summer.

"It's fair to say he's played his last game for Yeovil this season," said Johnson. "It's a horrible injury - it's never nice when you're dealing with cruciates.

"They can be fixed but it does take time. It's unfortunate for him but he's young enough to get through it."

Yeovil will have to continue paying the wages of Williams, who made nine appearances for the Glovers this term without scoring.