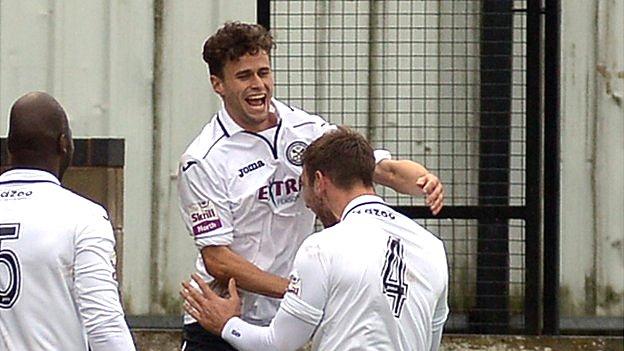 Hednesford boss Rob Smith wants his players to forget about the club's previous FA Cup successes and focus on making their own mark.

The Conference North side return to the first round proper against Crawley on Saturday, ending an eight-year absence.

The Pitmen's best Cup run, in 1997, ended in a fourth-round tie at Middlesbrough, which they lost 3-2.

Hednesford reached the the FA Cup first round proper for the first time in 72 years in 1997 and went on a stunning run to the fourth round.

They beat Southport in the first round, overcame Blackpool 1-0 in the next stage and had a record crowd of more than 3,200 pack into Keys Park to watch them see off York City in the third round.

The "giant-killing phenomenon", as the Pitmen were known at the time, were finally overpowered 3-2 by a Middlesbrough side fronted by Italy international Fabrizio Ravanelli. The "home" game was moved to the Riverside Stadium, drawing a crowd of 27,511.

Hednesford beat Hull City in the first round of 1997-98 before losing to Darlington.

They again battled through to the second round in 1998-99 when Cardiff City knocked them out.

"People go on about the old Hednesford and how they did, but it is about this set of lads," Smith told BBC WM.

"Middlesbrough was a big game. They picked up a few big scalps along the way, and we are reminded of that with the pictures up around the ground for all to see.

"It was a fantastic time for the club.

"I'm just pleased for everyone around the club that we are back in the first round."

Smith believes his side have already etched a special place in the club's history after overcoming West Auckland Town on penalties in their third qualifying round replay last month with just nine men.

Hednesford, who are top of their league in the sixth tier of English football with 10 wins from 13 games, went on to beat Stamford AFC to book their place in the first round proper.

"They have done ever so well for me in all competitions, as they did last year, and they deserve this shot. I'm certain they won't let me down," Smith added.

One parallel between the latest Hednesford side and the class of 1996-97 is that 24-year-old striker Elliott Durrell, who has netted 19 times in 17 appearances so far this season, is one of just two post-war players to score more than 100 goals for the club.

The other was Joe O'Connor, the chemical factory worker who was on target twice against Boro - a team which went on to reach the final before losing 2-0 to Chelsea, more than 16 years ago.

"Elliott has a bit of magic in him. He is capable of getting something out of nothing and we hope he can do it on Saturday," added Smith.