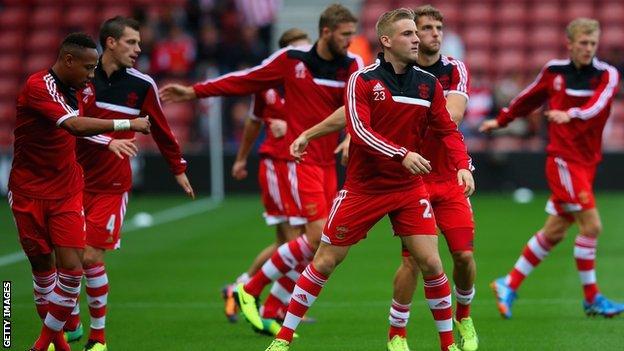 Southampton legend Matthew Le Tissier says the club's current squad far exceeds any he was part of after Jay Rodriguez, Adam Lallana and Rickie Lambert were called up by England.

Saints sit sixth after a top-flight start only bettered in their history when finishing runners-up in 1983-84.

"It would be some achievement to emulate that," Le Tissier said.

"But in terms of the strength of the squad this is far better than anything I can remember during my time."

Le Tissier admitted to being a little surprised at three Saints players receiving call ups for the friendlies against Chile and Germany.

The last time that happened was in January 1986, when Peter Shilton, Danny Wallace and Mark Wright were in the team that beat Egypt 4-0.

"Adam Lallana has been in excellent form. Rickie Lambert is improving all the time and Jay Rodriguez has been a thorn in the side of many defenders this season."

Lambert already has three caps and two goals for his country, while Lallana and Rodriguez are yet to make their debuts.

And with Lambert having every chance of going to next year's World Cup, Le Tissier feels Lallana could also force his way into the squad for Brazil.

"Adam is one of those players who can unlock a tight defence," he said.

"He is different to most other players in the squad and may be the one who is a dark horse to make the squad for Brazil."

Hodgson himself paid tribute to the club, saying all three deserved their call up after an impressive start to the campaign.

"They have been the team, I think, that has taken the league by storm," Hodgson said of Southampton's season to date.

"No-one mentioned them amongst the top five or six clubs at the start of the season, so congratulations to them.

"There is Lallana, Lambert, Rodriguez and there is a Nathaniel Clyne, who is always in our thoughts. There is James Ward-Prowse and Luke Shaw in the Under-21s.

"Southampton at the moment are becoming a very good club as far as England are concerned in terms of providing players."

And Hodgson added he felt the upcoming friendlies provided the ideal opportunity for him to give Rodriguez and Lallana their chance.

"We like what we see there and this was a great opportunity," he said. "I didn't necessarily want to make too many changes before the important last four qualifiers.

"I had a squad of players who had been there and been with us all along. It would have been, I think, the wrong time to introduce them then.

"But it seems to me now is the right time to introduce them and I hope they will be happy to be selected. If they get a chance to show what they can do, I know they won't let their country down."