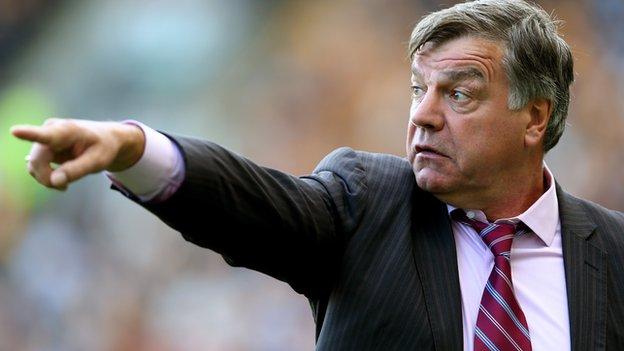 West Ham manager Sam Allardyce reckons Saturday's Premier League trip to Norwich is a "six-pointer" despite the season only being 10 games old.

Defeat could see the Hammers drop below Norwich, into the bottom three.

"It is a six-pointer already," he said. "We'll get a Norwich City team that will come and fight for everything."

I always focus on these, they are the bigger games for us

Allardyce believes results against sides close to them in the table are more crucial than other matches - including their 3-0 win at Tottenham.

"It has always been more important for me," said Allardyce. "Those are the games that if you play your best you have got a really good chance of winning.

"You can play your best against the big boys, give all you've got and be very, very good but still lose a game of football because of the amount of talent and the money they have spent.

"I always focus on these, they are the bigger games for us, the games you need to play at your best and give yourself a chance."

Despite their impressive win at White Hart Lane, West Ham have only won two games this season while Norwich boss Chris Hughton is under pressure after taking only one point from their last 12 including a 7-0 thrashing by Manchester City in their last outing.