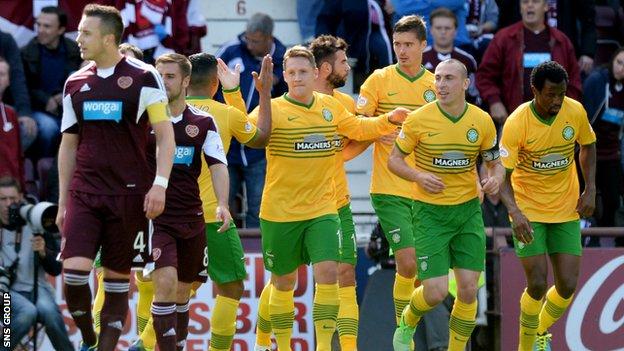 BBC Scotland will broadcast live coverage of Hearts v Celtic in the fourth round of the Scottish Cup.

The match will be played at Tynecastle on Sunday 1 December, with a 15:00 GMT kick off.

The tie will be shown on BBC One Scotland and the BBC Sport website, while BBC Radio Scotland will also cover the action.

Celtic are the current cup holders and Hearts lifted football's oldest trophy in 2012.

Neil Lennon's team were 3-1 winners in the west of Edinburgh in September and won 4-0 on their one visit to Gorgie last season.

However, Hearts triumphed in the most recent Scottish Cup meeting, with a last-minute penalty from Craig Beattie settling the 2012 semi-final at Hampden.

BBC Scotland's Sportscene will also provide highlights of every match in the fourth round of the Scottish Cup on 30 November and 1 December.