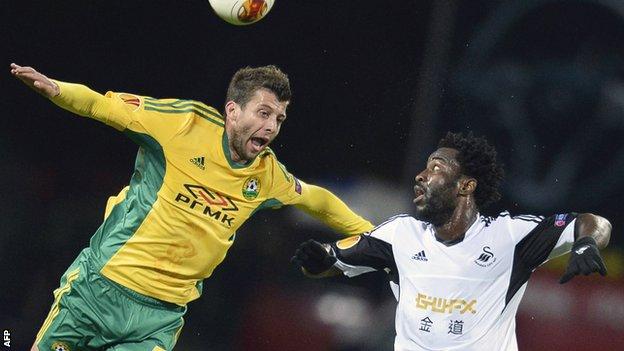 Swansea City manager Michael Laudrup focused on the positives despite his side conceding a late equaliser for the second time against Kuban Krasnodar.

Ibrahima Balde's goal saw the Russians a fortnight after they did the same in Wales.

Laudrup was encouraged by an improved performance and the fact Swansea still have qualification for the Europa League last 32 in their own hands.

"Everybody would have [taken] that before we started this group," he said.

"We have two possibilities, first we have [Valencia] at home and then we have even the second one [at St Gallen]."

The Swans need two points from their last two games, while anything less than two victories for St Gallen would also see Laudrup's men through.

Valencia's 3-2 win at St Gallen means Swansea would already be through if they had held on at the Kuban Stadium, or at home in their previous tie.

And Laudrup admitted his side were "disappointed" they had not won.

But despite that - and losing top spot in Group A to Valencia - he was pleased with his players' performance.

The Dane made seven changes to the side that started last weekend's Welsh derby defeat at Cardiff City in the Premier League.

"It's not a question about resting players. You need to use players... after a performance like this I think it's great.

"If you play the same players all the time... and suddenly you have two or three injuries, then you will have players who can only play 60 minutes. So that's why it's important to use your squad.

"Now we have Stoke on Sunday, then we have the international break and when we come back we play seven games in three weeks.

"Then we have one week and we go into the Christmas programme and we all know what that means, so we need the players."