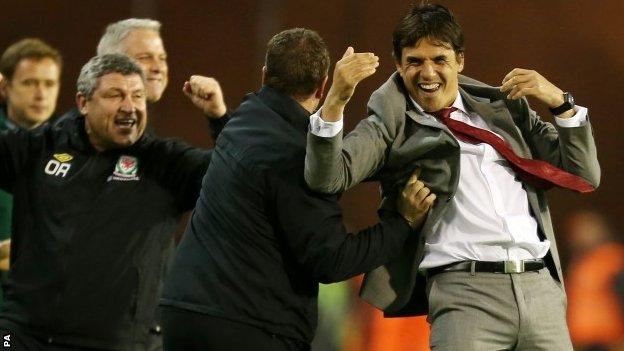 The 43-year-old, whose current deal will end after the game against Finland on 16 November, has been linked with the vacant position at Crystal Palace.

The FAW said on Friday that the meeting was a "general catch up".

Speculation over Coleman's future increased after Friday's news conference to name the squad to face Finland was cancelled.

Coleman did however name his squad, including Gareth Bale, for the friendly in Cardiff on 16 November.

"We have discussed it with Chris and we have decided to release the squad by email because it would be a worthless exercise holding a press conference when all the questions will be about Chris's contract and Crystal Palace," a Football Association of Wales spokesman said.

"We are not hiding anything. Chris will be in Cardiff on Friday."

BBC Sport has learnt a new contract for Coleman will be on the agenda at his meeting with FAW officials, with just eight days to go before his current deal expires.

Despite failing to lead his side to the 2014 World Cup finals, Wales completed their Group A campaign with victory over Macedonia followed by a 1-1 draw against group winners Belgium. Coleman's men finished fifth after three wins, a draw and six defeats.

"If I had lost the two games, I wouldn't have been expecting to have been told I wasn't the man to take us forward," the former Fulham manager said after his side's final two qualifiers.

"Equally, two great results does not mean I expect to be told I am the man to take us forward."

However, FAW chief executive Jonathan Ford had previously told BBC Radio Wales that Coleman would not have been judged on the results of those final games.

Midfielder Joe Ledley and full-back Neil Taylor have both stated that they would like the former defender to remain in charge of the national team.

Crystal Palace - where Coleman spent four years as a player - have been looking for a new manager after Ian Holloway left the position last month.

John Hartson said on Wednesday he would stand down as Coleman's assistant.