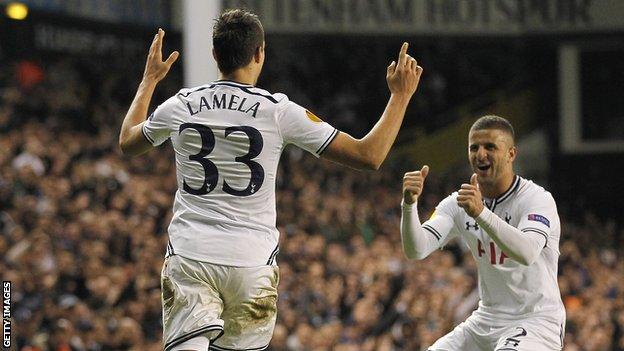 The Argentina winger scored the opener and then won a penalty as Spurs beat Sherriff Tiraspol 2-1 to reach the Europa League knockout stages.

"We had been waiting for Lamela to have a game like this," said Villas-Boas. "Hopefully he can now progress."

The 21-year-old moved to north London from Roma for £25.7m in the summer, however, despite his substantial fee, Lamela is yet to start a Premier League game, with the emergence of England winger Andros Townsend providing additional competition for a starting role.

A well-crafted assist from Lamela allowed Paulinho to score a late winner at Cardiff City earlier in the season, but the former River Plate player delivered a telling contribution throughout his fourth Europa League appearance for his new club.

His left-footed strike gave Spurs the lead on the hour and when his solo run drew a foul from Djibril Paye, Defoe secured Tottenham's progress from Group K with a penalty.

Villas-Boas added: "He is very creative and has no fear to take on his man and beat him. [Scoring] can only help in his confidence."

The Portuguese also paid tribute to Defoe and said: "We are all particularly happy for him. It is a great honour and will stay in time like Martin's and will be very difficult to break.

"I hope it means this club will continue on this competition in to the later stages to make it even more prestigious for him."