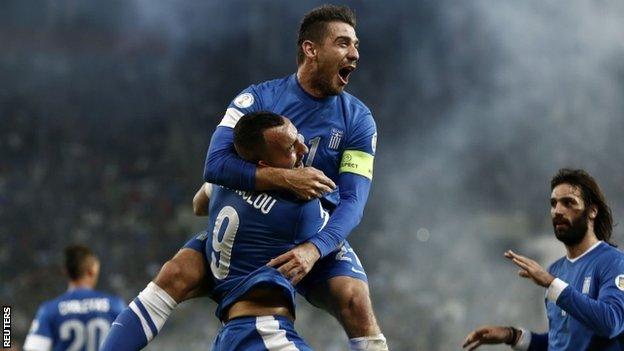 The Olympiakos striker, 25, volleyed an opener and struck again to add to Dimitris Salpingidis's close-range finish as Greece recorded a seventh successive win.

Romania, who had Costin Lazar sent off in stoppage time, were briefly level through Bogdan Stancu's header.

The sides meet on Tuesday in Bucharest.

Greece have won seven matches in a row, with Romania's goal in Athens the only one they have conceded in those games.

Greece missed out on automatically qualifying for Brazil 2014 as a result of inferior goal difference to Group G winners Bosnia-Hercegovina.

Fernando Santos's side had not conceded in six outings ahead of the visit of Romania and their fine form continued when Mitroglou volleyed in after a superb delivery from Salpingidis on 14 minutes.

Stancu leapt to convert Gabriel Torje's free-kick just two minutes later and give the Group D runners-up an away goal, but Salpingidis capped an engrossing opening quarter with a tap-in to restore the home lead.

The Euro 2004 winners continued to control proceedings and Celtic's Georgios Samaras could have extended the advantage, before Mitroglou added his 19th goal for club and country this season.

He latched on to Kostas Katsouranis's flick-on to put the result on the night beyond doubt with a powerful finish and could have scored a third, but for good goalkeeping by Bogdan Lobont.

Greece captain Katsouranis was booked and will miss the second leg, as will Romania's Lazar, who saw red in injury time for a second bookable offence.

"The players worked very hard and this paid off.

"But we can't go into the next match acting like we have the advantage. That would be risky. We are going to fight very hard to stay ahead.''

"I expected a difficult night and that's what it was.

"They took the lead so quickly after the equalizer. And I don't want to talk about the third goal. It looked like something that happens in a school playground."