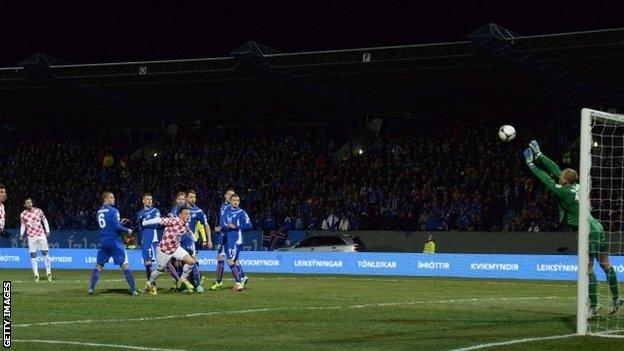 Ten-man Iceland drew against Croatia in the first leg of their play-off to keep alive their hopes of becoming the smallest nation to reach a World Cup.

Midfielder Ivan Perisic had the best chance for Croatia when he fired a shot narrowly wide late in the game.

By that stage, Iceland had been reduced to 10 men when Olafur Skulason was shown red after he had impeded Perisic.

Iceland could become the first country with fewer than a million people to reach the World Cup.

With a population of 320,000, they would beat Trinidad & Tobago's record of the smallest country to reach a World Cup by more than one million.

That was the second blow suffered by Lars Lagerback's side, who prior to the break were weakened when Ajax striker Sigthorsson came off injured.

"The players did a fantastic job but the referee [Alberto Undiano] didn't have his best day," Lagerback told Icelandic television. "I'm not satisfied.

"Someone watched the replay on TV and they said it [the red card] was very, very questionable, but it wasn't just that. In many situations the referee didn't know if he should blow or not.

"To defend for almost 45 minutes with one less man on the pitch - I can't describe in words what these players have done."

The second leg takes place in Zagreb on Tuesday which will determine who goes through to the World Cup finals in Brazil in June.