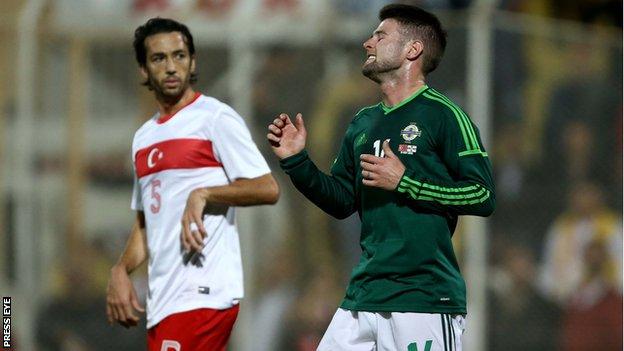 A goal by Mevlut Erdinc in first-half injury-time gave Turkey victory over Northern Ireland in a keenly contested friendly game in Adana.

Mevlut latched onto a long ball from Bilal Kisa and took advantage of a misunderstanding between Roy Carroll and Chris Baird to nip in and score.

Oliver Norwood had chances for NI but fired over the bar and saw a right-foot shot saved by Tolga Zengin.

Aaron Hughes almost scored an own goal while Burak Yilmaz hit the woodwork.

Northern Ireland travelled to Adana in the hope of putting a disappointing World Cup qualifying campaign, which yielded just one win from 10 matches, behind them.

Turkey finished fourth in their World Cup qualifying group behind the Netherlands, Romania and Hungary and had Fatih Terim starting his third term in charge of the national team.

Despite working with a squad depleted by injuries, NI manager Michael O'Neill selected an experienced line-up in a 3-5-2 formation for his first game in charge since agreeing a new two-year deal which will see him remain at the helm for the Euro 2016 qualifiers.

Turkey exerted all the early pressure and Roy Carroll was forced into a good save from Bilal Kisa in the opening minutes.

The home side had the ball in the net twice but on the first occasion the flag went up for offside against Arda Turan and then a referee's assistant ruled that the ball had gone out of play before nestling in the back of the net.

Northern Ireland's goal continued to live a charmed life as Steven Davis headed off the line from Adam Buyuk's initial effort and then Norwood headed onto the underside of the bar from Ersan Adem Gulum's follow-up attempt.

The visitors' best chance of the opening half fell to Norwood, but he fired over the bar after some intricate football from O'Neill's side.

Just before the break, Bilal saw his left-foot drive fly wide of the post, before St Etienne forward Mevlut found the net for his fifth international goal with the final touch of the first half.

Bilal chipped the ball forward from midfield and Mevlut took advantage of a failure of communication between Baird and Carroll to poke the ball home with his left foot.

After the break, Norwood's curling shot from just outside the box fell into the hands of Tolga and then Hughes almost scored an own goal when the ball came off his foot while defending a Melvut cross and cannoned off the post.

Substitute Burak saw his left-foot strike come off the woodwork while soon after a Davis volley from Ryan McGivern's cross was blocked.

Chances were few and far between in a second half punctuated by a raft of substitutions but Martin Paterson fired well over late on when the ball broke to him in the penalty area.

The match did however mark the international debut of New York Red Bulls midfielder Jonny Steele, who replaced Niall McGinn after 67 minutes.

So Northern Ireland's last game of 2013 ends in defeat and manager O'Neill's record now reads one win, six draws and eight defeats from his 15 games in charge.