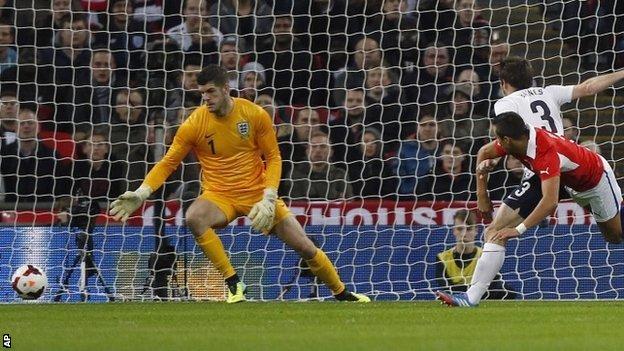 Chile repeated their 1998 Wembley victory over England as two goals from Barcelona striker Alexis Sanchez made it a disappointing night for Roy Hodgson's experimental side.

It was Marcelo Salas who did the damage back then with two goals in a 2-0 win - this time it was the outstanding Sanchez who punished a disjointed England at either end of a friendly game in which Chile's superiority was obvious.

But it was Hodgson's more experienced players who were at fault as a 10-match unbeaten run was brought to an end.

How did Lallana do?

First, Sanchez stole in front of left-back Leighton Baines to head in the opener early on, then he took advantage of a dreadful error from Gary Cahill in stoppage time to race clear and finish coolly past the advancing Forster.

Forster was blameless, saving well in the first half from Wigan's Jean Beausejour, but it was clear early on that this revamped England line-up was struggling to pass the tests the talented Chileans would pose for them.

Lallana was bright throughout before being substituted late on, although it was a quieter introduction for Rodriguez, given his chance by Hodgson after a fine start to the season at Southampton.

Forster's fine form for Celtic, especially in the Champions League, earned him a deserved chance but his first meaningful act was to pick the ball out of the net as Chile took that seventh-minute lead.

Charles Aranguiz had seen his shot blocked but when the ball was returned into the area Sanchez was more alert to the situation than Baines and got in front of Everton's defender to head low beyond Forster.

Lallana was a lively figure and his early free-kick found Phil Jones, who saw his header saved in his usual unorthodox fashion by Chile goalkeeper Claudio Bravo.

The last team to beat England by a margin of two goals or more at Wembley were France, who came to London as world champions in February 1999 and won 2-0 thanks to two Nicolas Anelka goals

Forster will have felt better when he made a fine diving save from Beausejour as England's defence struggled to cope with the mobility and pace of Chile's attackers.

Frank Lampard was England's captain in place of the injured Steven Gerrard and he was warmly applauded before kick-off when he received a commemorative golden cap from World Cup winner Sir Geoff Hurst and his father, Frank Sr, after making 100 international appearances.

And he almost marked his 103rd cap with a spectacular strike, only to see his 30-yard free-kick turned away acrobatically by Bravo.

Forster did well once more to force Beausejour wide and away from danger as England's uncertain defence was undone in a manner which would have perturbed Hodgson.

Lallana continued to make a good impression, though he will have been frustrated not to have scored a debut goal when his angled shot after took took a touch off a Chilean defender and went wide after he had been played in by Wayne Rooney just before the break.

Rodriguez, in contrast, had been quiet and his first England appearance came to an end after 56 minutes when he was replaced by Andros Townsend.

England had some lively attacking moments but the second half was a tepid affair with both sides struggling to create chances.

Hodgson threw on a host of substitutes in an attempt to rescue a draw but it was to no avail and Sanchez finished England off when Cahill carelessly conceded possession with seconds left.

Some boos rang out at the final whistle, a harsh verdict perhaps, but life will not get any easier for England as they face Germany here at Wembley on Tuesday.