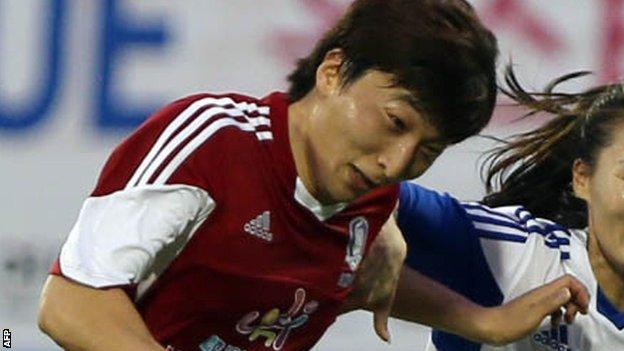 Rival coaches in South Korea's women's league have threatened to boycott the new season if Seoul City striker Park Eun-Seon does not have a gender test.

Park was top scorer in the league with 19 goals in 22 games as Seoul City finished second in the 2013 season.

"We have no intention of accepting the gender verification test just to stop the boycott," said Seoul Sports Council general secretary Kim Joon-Soo.

"But if it is needed for Park to compete in an international game and under specific regulations of Fifa, we will consider it."

It is not the first time the South Korea international's gender has been questioned, with the most recent occasion coming before the 2010 AFC Women's Asian Cup, when host nation China raised the issue. She was not selected by South Korea for the tournament.

"This is a serious violation of human rights that she's suffering for a second time. The question regarding Park's gender identity shall never be raised again. The city of Seoul will take all necessary measures to protect our player's human rights," Kim added.

"I have gone through the gender examination thing several times. I did it in a World Cup, in an Olympics and in several others and there were no problems," she added.

"I've worked so hard to get to this point, and I will not give up easily. I know what these people are trying to do, and I won't fall down."

The boycott threat was made by coaches from six of the seven WK-League sides, and they also asked the Korea Women's Football Federation (KWFF) to bar Park from playing until her gender is verified.

But her club responded: "Demanding a gender examination on a person is a serious human rights violation that insults someone's character."

On Thursday, one of the six coaches who sent the original request to the KWFF expressed regret and said he was resigning, although he insisted the coaches' motives had been misunderstood and that they had been joking.

The most high-profile case of sporting gender tests in recent years was that of South Africa's Caster Semenya following her victory in the women's 800m at the 2009 World Athletics Championships.