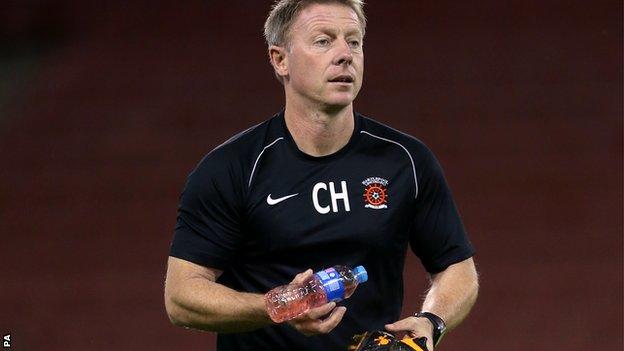 Hartlepool boss Colin Cooper believes assistant Craig Hignett should be given much of the credit for the club's form.

Pools have won six of their last seven matches, a run which saw Cooper and forward Luke James crowned League Two manager and player of the month.

James, 19, has already scored seven goals this term, six in the league.

"Higgy deserves a huge pat on the back, especially with how Luke is performing. He spends a lot of extra time with the front men at this club," said Cooper.

During a 19-year playing career, Hignett scored 125 league goals in 366 starts, most notably during spells with Crewe, Middlesbrough and Barnsley.

he and Cooper have converted teenager James into a lone striker.

Before this season, he was primarily used in a deeper role, but after James moved further forward.

In February 2013, Pools won both the player and manager monthly award - but before the next campaign Peter Hartley and John Hughes had both left.

"I don't think it's a coincidence that we've got four or five players scoring goals now and Craig is out on the training ground putting on extra sessions," Cooper told BBC Tees.

"Higgy enjoys it and having been a forward thinking player himself, he's passing on that as a young player, if you want to improve then you must spend that extra time on honing your skills."