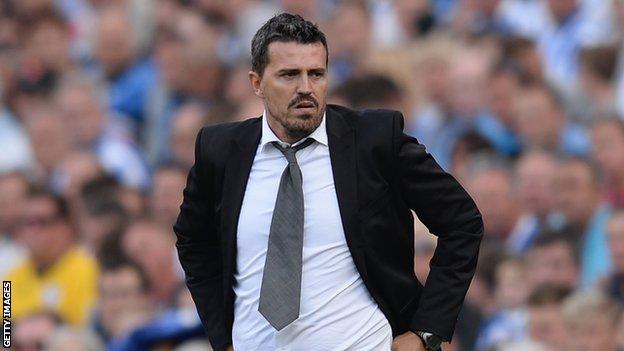 The Spaniard took charge of the Seagulls in the summer, but their start to the Championship campaign has been hampered by a long injury list.

"I hope there is a bond building up between the manager and the fans.

"They haven't seen the best of us yet, but they have been excellent," 40-year-old Jones told BBC Sussex.

Garcia replaced Gus Poyet, who led the Seagulls to the play-off semi-finals last season, following the Uruguayan's sacking in June.

The former Barcelona midfielder, also 40, won the Israeli league title with Maccabi Tel Aviv last season, but the start of his spell at the Amex Stadium has coincided with Brighton having to cope without a string of first-team players because of injuries.

Influential midfielders Liam Bridcutt and Andrea Orlandi and strikers Leo Ulloa, Craig Mackail-Smith and Will Hoskins are among those on the sidelines.

Albion are currently mid-table in the Championship, with four wins from their opening 14 league games.

"Oscar is a real fantastic manager and a great character - probably different from what we have had here," Jones said.

"He is very methodical in how he does stuff and is a lovely man. He really thinks about the game, has a philosophy and we are thorough in everything we do."

Brighton had the highest average home attendance in the Championship last season of 26,236 and the club are on course to repeat that feat again in 2013-14.

"The fans have been outstanding," Jones said. "Brighton fans always are; the amount that have turned up, they way they get behind the team - even when things don't quite go well.

Brighton have been training at their former Withdean Stadium home ahead of this weekend's Championship match against Blackburn Rovers.

The Seagulls spent 12 years playing at the athletics ground prior to their move to the Amex in the summer of 2011.

"It was nice - we were reminiscing," Jones said.

"It's logistical more than anything. There is a fantastic surface down there and the groundsman has done great work.

"It is a good place to train and I think we will use that facility quite a bit.

"The Withdean was a good home to the Albion, with four promotions and fantastic memories there."