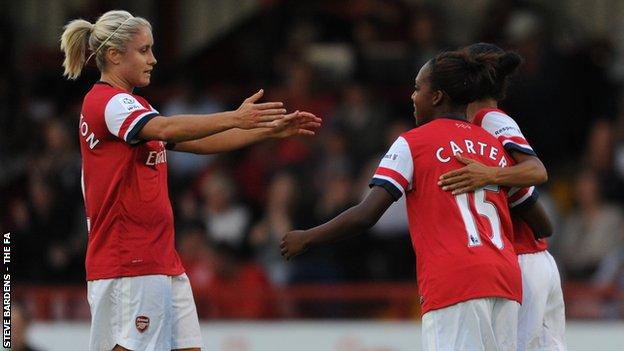 Arsenal are on course for their 12th successive Champions League quarter-final after beating Glasgow City 3-0 in the last 16 first leg at Barnet's The Hive stadium.

Ellen White headed in another Yankey cross for a third after the break.

The second legs for both ties will be played on Wednesday.

Glasgow have never progressed beyond this stage in the Champions League and the Scottish Premier League champions have a huge task on their hands if they are to turn the tie around.

Arsenal, who finished third in this season's Super League, were on top from the start and could have been further ahead by half-time had it not been for some wayward finishing and brave Glasgow defending.

Kim Little fired over the bar on 12 minutes following a neat exchange with Jordan Nobbs, before Houghton broke the deadlock two minutes later.

Carter then struck just before the break, finishing emphatically from Houghton's delivery.

Joanne Love spurned the visitors' best chance of the half when she shot wide after being put through by midfielder Jess Fishlock soon after Arsenal's opener.

Glasgow were more of an attacking threat after the break with Christie Murray going close with a clever chip that beat goalkeeper Emma Byrne but went wide of goal.

But England striker White put Arsenal firmly in control on 64 when she met Yankey's cross to head her side into a 3-0 lead.

A goal in each half from Isobel Christiansen and Josanne Potter gave Birmingham an impressive victory in Russia to put them in control of their Champions League last 16 tie.

It is unfamiliar territory for the Blues, who only made their Champions League debut last season when they were knocked out in the last 32.

Former Everton striker Christiansen opened the scoring for Birmingham, who finished this season's Super League in fourth, on 27 minutes from Laura Bassett's assist.

And the lead was doubled against the Russian champions when Potter latched on to England winger's Karen Carney's pass on 57 minutes.

FK Zorkiy pushed forward late on in desperate search of a way back into the game but Birmingham's defence held firm to give them a good opportunity of progressing into the quarter-final in Wednesday's second leg at St Andrews.