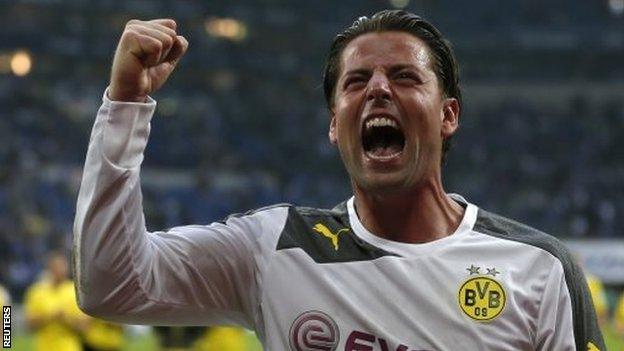 Arsenal duo Mesut Ozil and Per Mertesacker and Chelsea forward Andre Schurrle have been named in the Germany squad to face England at Wembley.

"Wembley is legendary and it is an amazing experience for anybody to play there," Low said.

"Games against England are prestigious matches with an explosive atmosphere."

Weidenfeller (pictured) is set for a debut either against Italy in the San Siro next Friday or England the following Tuesday, with Low adamant that there are places to be won in his squad for next summer's World Cup.

Low said: "Manuel Neuer remains our clear number one and we also know what Rene Adler or the younger goalkeepers like Ron-Robert Zieler and Marc-Andre ter Stegen can give us.

"We've been watching Roman Weidenfeller for a long time and his consistently strong performances for Borussia Dortmund in the Bundesliga and the Champions League have been noted.

"We're now looking forward to having him with us and getting to know him better."

Bayern Munich midfielder Bastian Schweinsteiger is out with an ankle injury, but veteran forward Miroslav Klose returns to the squad.

Germany qualified for the World Cup in Brazil with last month.