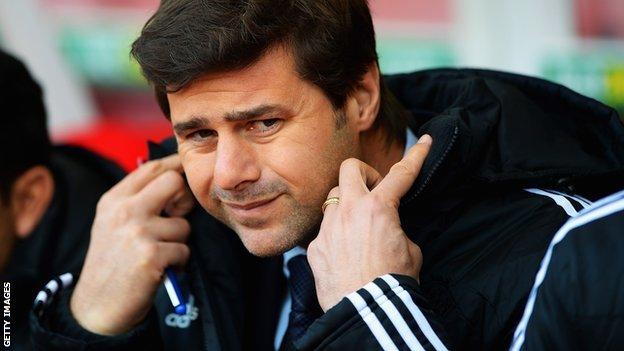 Southampton head coach Mauricio Pochettino has been rewarded for his side's impressive recent performances by winning the Barclays Manager of the Month award for October.

The news comes a day after Saints trio Jay Rodriguez, Adam Lallana and Rickie Lambert were called up by England.

Pochettino's side, who are sixth in the table, picked up seven points from their three league matches in October.

"In football nothing really surprises me," Pochettino said.

"I think Jay fully deserves the call-up following his run recently. He's had really good progress. I am really happy for him and the other two players. We are really proud of the three of them."

Southampton recorded wins against Swansea City and Fulham as well as a draw at Manchester United last month.

The Argentine took over at the south-coast club in January, following the sacking of Nigel Adkins.

It is the first time Manchester City striker Sergio Aguero has won the player award. He was recognised following an impressive four goals in three games for Manuel Pellegrini's team.

City have the league's best attacking record this season, and Aguero is joint top-scorer on eight goals, alongside Liverpool's Daniel Sturridge.