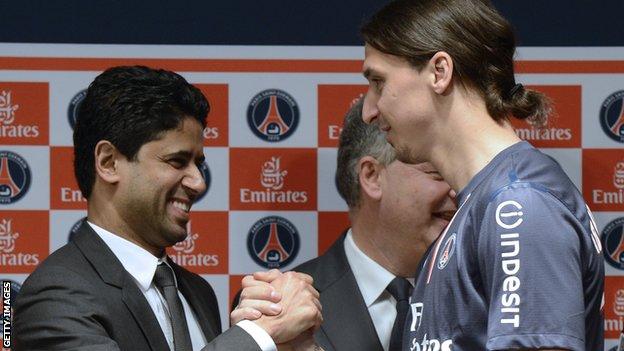 Zlatan Ibrahimovic will play for Paris St-Germain until he retires, according to the French club's president Nasser Al-Khelaifi.

The Sweden striker, 32, joined PSG last year and signed a new deal in September to keep him at the club until 2016.

He previously suggested he would be open to a move to the Premier League in the future.

"He's said he wanted to retire at this club and it will be his last club," Al-Khelaifi told BBC World Service.

Ibrahimovic was Ligue 1's top scorer last season with 30 goals in 34 games as PSG won their first league title since 1994.

He has 12 goals in 16 appearances for the club this season, with his tally helping PSG to the top of Ligue 1 and their Champions League group.

"I think he is one of the best three players in the world," added Al-Khelaifi.

"He deserves to be the best player in the world this year with the things he is doing."