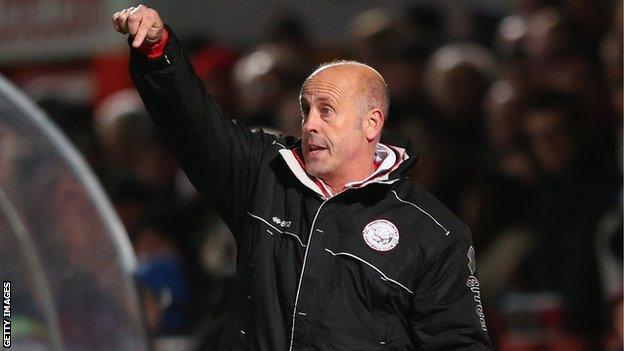 Hereford United manager Martin Foyle has been angered by a fixture pile-up causing the Bulls to play twice in little more than 48 hours.

Their FA Cup first round tie at Burton was switched to Sunday because of the home side's clash of shared matchday stewards with neighbours Derby County.

But the Bulls' appeal to have Tuesday night's home league game with Chester put back 24 hours has been turned down.

"I'm disappointed with the FA and also with the Conference," said Foyle.

"That they didn't move the Chester game back to Wednesday to give us a bit more time to recover.

Hereford, who have a proud history in the FA Cup, put out League One side Shrewsbury Town at this same stage last season, before taking Cheltenham Town to a second round replay.

"They said 'You've played two games in two days before, haven't you?

"We're disappointed that Burton moved the game from Saturday to Sunday as 10 of their stewards are working at Derby on the Saturday, which is pathetic.

"All it does just crank up the pressure from Sunday to Tuesday night, with no time for a turnover

"That's when you feel everything's against you.

"But I said to the lads, 'let's roll our sleeves up, stick together, prove people wrong and see where we can go'. It's a game we can get something out of, no question."

Foyle's concern over the fixture congestion is enhanced by the importance of next Tuesday night's game against Chester, one of the Bulls' relegation rivals.

With 22nd-placed Chester in league action this Saturday, playing bottom club Hyde, and both Woking (21st) and Tamworth (20th) having home fixtures in an almost full midweek Conference Premier programme, a fifth league defeat in six games could plunge the Bulls into the bottom four.