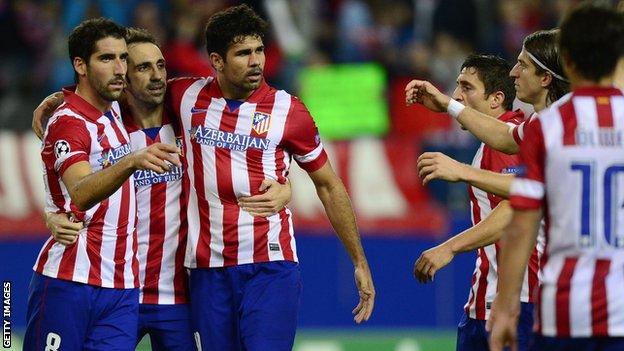 When Atletico Madrid thrashed Austria Vienna 4-0 on Wednesday to win their Champions League group with two games to spare, it was their 15th victory in 18 outings so far this season.

In addition to their dominant European form, the Spanish capital's lesser lights are also challenging strongly at the top of La Liga, currently positioned only one point behind Barcelona - and five clear of more glamorous neighbours Real Madrid - heading into this weekend's trip to Villarreal.

Furthermore, Los Rojiblancos are also the reigning Spanish cup holders, having defeated Real 2-1 thanks to an extra-time goal by Brazilian defender Miranda in May's thrilling Copa del Rey final at the Bernabeu.

Remarkably, that was their first triumph against Real since 1999, but they soon proved it was no fluke by deservedly winning again at the Bernabeu, this time in La Liga, with a solitary strike from Diego Costa in September.

Despite their impressive string of successes, however, Atletico's intense and eloquent manager Diego Simeone has repeatedly downplayed their chances of sustaining a title challenge, consistently asserting that La Liga is "boring" because Barca and Real's financial muscle will eventually allow them to pull clear.

Although his downbeat rhetoric is partly a ploy to minimise the expectation placed upon his team, Simeone is almost certainly right.

Atletico started last season in similarly strong form, until the onset of injuries, suspensions and general fatigue later in the campaign ensured they eventually finished 24 points behind title winners Barca.

Considering their relatively meagre resources, it will be difficult for Atletico to prevent the same thing happening again - although it may well be a significantly closer race this time around.

On the European front, however, things could be very different and Atletico Madrid should be taken seriously as one of the leading contenders to lift the Champions League trophy in Lisbon on 24 May.

Over the last few years, they have consistently proven themselves to be cup specialists, capable of raising themselves for the big occasion. In addition to last season's Copa del Rey triumph, they also won the Europa League in 2010 (beating Fulham in the final) and 2012, as well as lifting the Uefa Super Cup with an awesome 4-1 demolition of Chelsea in August 2012.

And they have done it with a clearly discernible style. If you remember Simeone the player, you will instantly recognise his team - just like the former Atletico, Inter Milan, Lazio and Argentina midfielder, they are ferociously competitive and tactically disciplined, whilst also possessing often underappreciated technical ability.

This season's star man has undoubtedly been Costa, the match-winner in September's derby victory at the Bernabeu.

The powerful 25-year-old striker operated in the shadows of Radamel Falcao last season and has never previously scored more than 10 league goals in a campaign.

But he has now developed into a phenomenally consistent performer, registering 13 goals in 12 La Liga outings to become the joint top scorer (alongside Cristiano Ronaldo) across all the major European leagues.

Costa, who attracted serious interest from Liverpool in the summer, is the kind of player that his own team's fans love to love but everybody else loves to hate. He is aggressive, confrontational, prone to diving and continually arguing with referees - at times in the past, he looked more interested in starting a fight than playing football.

This season, though, perhaps spurred on by Falcao's summer departure to Monaco, he has been more focussed and consequently much more productive, to the extent that he has been at the centre of an unlikely international tug of war between his birth nation Brazil and his adopted nation Spain.

Although Costa has twice appeared for Brazil, they were only friendly fixtures so he is eligible to swap his international allegiances and, to the dismay of Brazil boss Luiz Felipe Scolari, he has decided upon that option.

The in-form striker was named in Spain's squad for the first time on Thursday ahead of next weekend's friendlies against Equatorial Guinea and South Africa, and currently appears to be in a straight race with Manchester City's Alvaro Negredo for the Spain number 9 shirt.

Costa's most important supplier this season has been Koke, a versatile, technically rounded and fast-improving young midfielder who has provided seven assists so far this season, joint top in La Liga alongside Barca winger Neymar.

Koke was a member of Spain's European Championship-winning Under 21 side in the summer and has now graduated to the senior squad, showing his adaptability by playing at right-back in September's World Cup qualifying victory against Finland.

It would, however, be easy to overstate the importance of Costa and Koke, because Atletico are a team in the truest sense. Simeone's attention to detail, along with his organisational and motivational abilities, have created a smoothly functioning unit that allows the team to perform cohesively all over the pitch.

On Sunday evening, Atletico will face a severe test as they travel to fourth-placed Villarreal, who have been inspired since returning to the top flight this season, already drawing 2-2 with Real and hammering Valencia 4-1 at their atmospheric Madrigal stadium.

It promises to be a fascinating game, but even if Atletico win there will remain a widespread sense that their title bid will inevitably falter, sooner or later, because of a lack of squad depth, especially in the attacking positions.

In Europe, though, watch out.

With a kind draw and good luck with injuries, these cup specialists could easily go all the way to Lisbon. And if they do reach the final, Atletico have developed a happy habit of winning them.