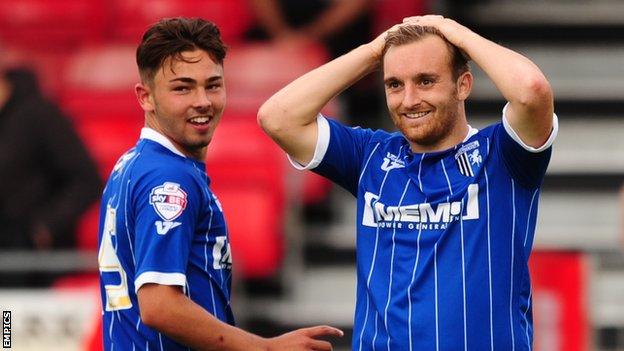 "Under Martin Allen, no disrespect to him, we were a bit more direct," Dack, 19, told BBC Radio Kent.

"Every footballer wants to try and play football the right way - which getting the ball down and passing it. To have someone who wants to play like that is a dream come true really."

Taylor was appointed on 14 October, a day after Allen was sacked following two wins from their opening 11 League One matches.

Martin Allen drilled into us what he wanted and it is hard to come out of that straight away. It is coming along but it does take time

The Gills have won two and lost two games since Taylor took charge at Priestfield.

"Since the new manager has come in he has tried to get his pints of view and his methods across," Dack said.

"In training we work a lot on team shape and we're looking into playing into midfield and off the centre-forwards. I'm enjoying how we are playing now.

"Martin Allen drilled into us what he wanted and it is hard to come out of that straight away.

"We have started to move the ball quicker. It is working and coming along, but it does take time."

Dack has made eight appearances for the Gills this season, with his two outings under Taylor coming as a substitute.

He could be involved from the start in Saturday's FA Cup first round tie at home to Brackley Town.

"It has been frustrating to not be in the team but I have got to keep working hard," he said.

"When I get my chance in the team I need to take it."