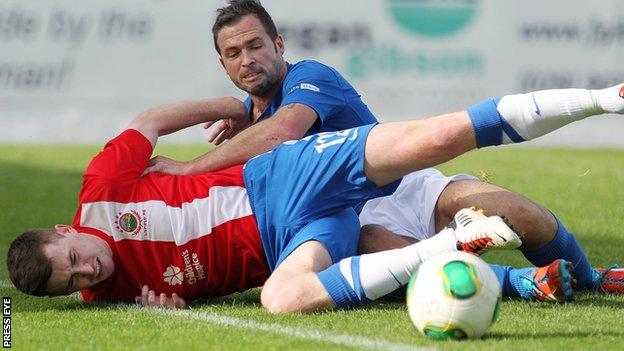 Crusaders boss Stephen Baxter rates Saturday's opponents Glenavon as one of the most improved teams in the Irish Premiership.

Glenavon are one place behind the second-placed Crues and will want to make amends for their heaviest defeat this season - a 3-0 reverse at Seaview.

"They have plenty of top strikers and we know one of them well in our former player David Rainey," said Baxter.

"But we have quality players ourselves and we will look after our team."

The Premiership game between Glenavon and Crusaders will be the featured commentary match in Radio Ulster's Sportsound on Saturday.

Commentator Grant Cameron is joined for the clash between the second and third-placed teams by Roy Walker who managed both clubs.

There will be reports on the day's other matches, followed by commentary from Dublin on Ireland's openign autumn international against Samoa, kick-off 17:45.

After losing their first two Premiership games of the season, Crusaders have been unbeaten in 12 league matches, taking 16 from the last 18 points available.

And Baxter believes his side will be involved in an exciting contest for league honours.

"The league impresses me this year, there are a lot of good teams around. Portadown and Glenavon have really improved from last season.

"As well as David Rainey, Glenavon have Guy Bates, Mark Farren and manager Gary Hamilton himself up front."

Elsewhere on Saturday, leaders Linfield will again be looking to the strike partnership of Andrew Waterworth and Matthew Tipton against Warrenpoint as striker Peter Thompson remains sidelined with a hamstring injury.

David Jeffrey's pacesetters, four points clear at the top, have taken 28 points from 10 matches, their only dropped points being in a 0-0 draw with Crusaders.

"Warrenpoint have had some fantastic results and will be formidable opponents," said manager Jeffrey.

"Anybody who looks at the league table and thinks the team placed higher will win automatically does not really know anything about the game."

Glentoran have put together a decent run themselves recently and Eddie Patterson's men, fourth in the standings, will be hoping for a fifth win in six league outings when they travel to Dungannon Swifts.

Portadown play Ballinamallard United for the first time since their amazing 11-0 win over the County Fermanagh side two months ago.

"That is forgotten about now," said United manager Whitey Anderson.

"Actually, it was forgotten about very quickly as we beat Coleraine in our next game."

The Reds have yet to hit the heights of last season but may be encouraged by the fact that their league wins over Ballymena in 2012/13 included 8-0 and 5-0 victories.

Coleraine, buoyed by their late win over Glenavon, are desperate to put a good run together as they try to get into the top half of the league table.

They are away to bottom side Ards who are three points adrift at the bottom of the table.

"Ards have beaten quality sides in Portadown, Ballymena and Ballinamallard so I expect them to provide a stern test," said Coleraine manager Oran Kearney.

"Our attitude will have to be spot on."