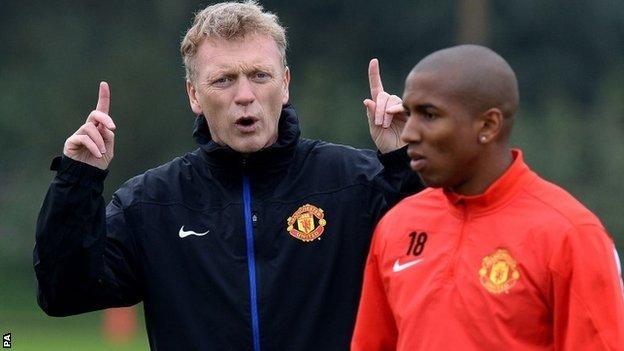 Manchester United manager David Moyes said questions should be asked of the referee rather than Ashley Young after the winger won a controversial penalty against Real Sociedad on Tuesday.

Young, 28, was accused of deceiving Italian official Nicola Rizzoli by going to ground too easily.

Moyes believed it was a penalty at the time and has not spoken to Young since.

"The referee was two yards away and gave a penalty kick. You need to talk to the referee," said Moyes.

Young was spoken to by former United boss Sir Alex Ferguson last year for diving, while Moyes gave the player another warning in September following a controversial incident in which Crystal Palace's Kagisho Dikgacoi was sent off.

But Moyes feels the player, who has won 30 caps for England, is being judged on reputation rather than the actual event.

"I do think a little bit of that," he said. "I also think the referee made the decision. If he had been a long way away, you could have maybe said what was it? But he was two yards away.

"He refereed the Champions League final so you are expecting him to be as qualified as anybody. If anything you should be talking more about the referee than the player."

When quizzed about Young's conduct and whether he went down too easily, Moyes added: "That is wrong. The question should be 'did the referee get the decision right or not'.

"For me, where I was, I definitely thought it was a penalty. Everybody can now stand back and watch it from TV.

"I was one of many who said I would definitely have retrospective action for diving because it would make the referees job much better.

"But on the night, if you had said, could you get the referee any closer, I don't think you could."