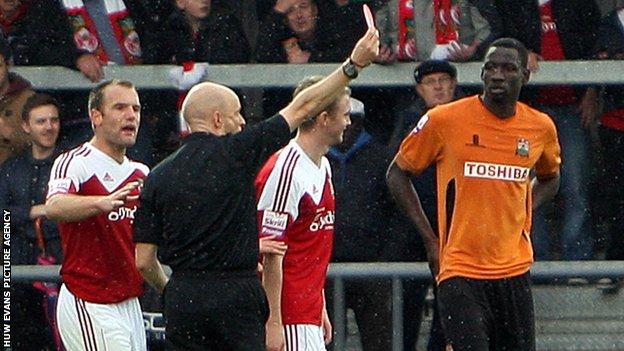 Midfielder Johnny Hunt is eager to get back in action for Wrexham after serving a three-match suspension.

Hunt was sent off for a poor tackle on Barnet's Curtis Weston, only a minute after coming on as a late substitute in the 1-1 draw in October.

It was first feared Weston had suffered a serious injury but a scan later revealed he had not broken his leg.

"It was a bad timed tackle but I've paid the price for it. It's not nice when you can't play," Harris said.

"I apologised straight after the tackle and I knew it was just a mistimed tackle. The ball was there to be won and I just got there late," Hunt added.

"I won't change my way. If the ball is there to be won I'll tackle again.

"There will be worse tackles than that in the future and I'll probably be on the end of a few."

Alfreton beat Wrexham at the same stage of the competition at the Racecourse last season and Hunt says that defeat will serve as a warning to his team.

"We're not going to lack past Alfreton. If we look past this game we'll end up going out. It's going to be a tough game - they're a good team," Hunt said.

"These beat us last year so we kind of owe them one.

"The lads are ready, so hopefully we can put a performance in and take a win.

"There's big teams that can come into town in later rounds but these are the rounds you've got to win first.

"You've got to turn up and perform to be ready for them teams hopefully."